Now that all three grandsons have the trilogy boxed set of the Hunger Games And now that Grandma has finished reading them,  it is time for the final review.  I guess the first thing that strikes me about this trilogy is how very sad it struck me.  The Hunger Games were established by the Capitol to remind the districts of the rebellion which led to the establishment of the 12 districts governed by the Capitol.  The Games were meant to control the districts and in reality provided entertainment for the population of the Capitol.  If two contestants from each District were to enter the games with only one to survive at the end of the games, then twenty three families would lose a beloved family member.

Catching Fire , the second in the trilogy, returned Katniss and Peeta to District 12 as victors.  However, although they had received money, the food to their families and district was doled out on a less than regular and fulfilling basis.   Katniss learned that since she basically embarrassed President Snow at the Hunger Games this year, he  declared personal war on her.   Her innocent act to offer to take both her and Peeta out, was interpreted as an act of rebellion and feared as a spark to open rebellion throughout the districts. When they went on the victory tour, they had best convince President Snow and the districts it was just a silly act of "being so in love",  and was the only option SHE could think of.    Security tightened up in District 12, Gale was punished for hunting outside the fence, Katniss failed at convincing President Snow, and another Game (Quarter Quell) was called.  It was unheard of....Katniss and Peeta faced the arena again with a whole new bunch of competitors and a lot worse adversity from the gamekeeper.

Third in the Trilogy was Mockingjay.   Our young couple was separated and doing an enormous amount of suffering apart from each other.  Katniss experienced every agony and frustration imaginable while in District 13.  Peeta was held captive by the Capitol and tortured.   All the districts have now rebelled against the capitol and all but a very few Katniss loved have died in the rebellion.

The writing of this trilogy and the storyline captured my attention and I dearly loved the characters throughout the book.   Katniss, though not the most sociable person in district 12, and rather a loner, still maintained a gentle spirit and a kind heart for the underdog and the disadvantaged.   She understood that war equals death and loss and suffering.   There were two quotes that particularly touched me and caused my tears to fall as I neared the end of the book.   "....but they will never again brainwash me into the necessity  of using them.  I no longer feel any allegiance to these  monsters called human beings, despise being one myself.  I think that Peeta was onto something about us destroying one another and letting some decent species take over.  Because something is significantly wrong with a creature that sacrifices its children's lives to settle its differences...........The truth is, it benefits no one to live in a world where these things happen."   My thought is just how far  are we from that status today.    Maybe not here (yet), but in areas that are actively fighting.

The second passage:  "What I need is the dandelion in the spring.  The bright yellow that means rebirth instead of destruction.   The promise that life can go on, no matter how bad our losses.   That it can be good again."   Thank God there is always that hope.

I will be having a conversation with my three grandsons when they finish the trilogy.   There is much room for discussion, especially when they are so oriented to the violent video games so prevalent today.   I hope this series touches their hearts as it did mine.

I apologize for the long post today.   May God Bless one and all. 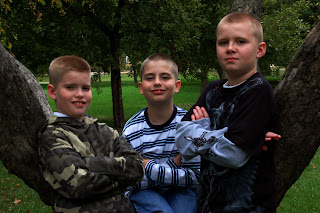