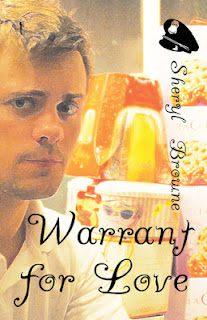 Warrant for Love
Love, blackmail, lies, adultery, entrapment.
Three couples in a twisting story that resolves perfectly.
Life for Paul sounds like your typical country song. He comes from a broken home, his wife is divorcing him, he's got no place to live, he's losing custody of his son, and his sergeant, who's sleeping with his wife, is a loud-mouthed braggart who won't let up on him – not even at work.
Leanne's caught her (now) ex cheating on her again, but before she can give him the what-for, she's wrongfully arrested for soliciting – by Paul and his partner. One thing leads to another and things could be looking up for Paul, except for Leanne's friends – quarrelling mom Nicky and financial goddess Jade – have it out for her ex.
Leanne wants closure, Paul wants a home, and Nicky and Jade want revenge. Blackmail, lies, adultery, entrapment. Will it all work out in the end or will Paul uphold the law? It soundslike he needs a Warrant for Love.

MY REVIEW:   will be forthcoming, due to health related issues. 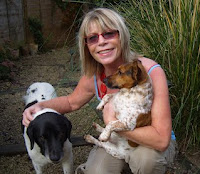 Author Bio:
Now residing in Worcestershire, Sheryl Browne grew up in Birmingham, UK, where she studied Art & Design. She wears many hats: a partner in her own business, a mother, and a foster parent to disabled dogs. Creative in spirit, Sheryl has always had a passion for writing. A member of the Romantic Novelists' Association, she has previously been published in the US and writes Romantic Comedy because, as she puts it, "life is just too short to be miserable."
Sheryl's debut novel, RECIPES FOR DISASTER - combining deliciously different and fun recipes with sexilicious romantic comedy, is garnering some fabulous reviews! Sheryl has also been offered a further three-book contract under the Safkhet Publishing Soul imprint. SOMEBODY TO LOVE, a romantic comedy centring around a single policeman father’s search for love, his autistic little boy and the boy’s Autism Assistance Dog, launched July 1 with an immediate 5* review.  WARRANT FOR LOVE, bringing together three couples in a twisting story that resolves perfectly, released August 1, and A LITTLE BIT OF MADNESS releases on Valentine’s Day 2013.
A loveahappyending Editor and featured Author
Publisher Page
Website
Facebook
Twitter: @sherylbrowne
Romantic Novelists’ Association

As part of my book blog tour I was invited to offer practical advice for beginning to write Romantic Comedy.

As mentioned elsewhere, my road to publication has been a long one and it’s only now I feel qualified to impart such advice.  My first ever romantic comedy was picked up by an agent, you see, who hailed it as a bestseller and was then possibly reduced to tears – along with yours truly – when it didn’t sell.  Overuse of barbed wit and slapstick I gleaned from feedback was the reason why.  I’ve been told by the BBC I have a flair for comedic situations vis-à-vis sitcom, but in regard to novel writing, back then, it was obvious I had some lessons to learn.
I wrote, embarked on a creative writing course, took on board every piece of advice and, finally, I think I got there.  I’d like to share some of what of learned along the way, in the hope it might help make the road a little less bumpy for anyone else starting out on the romantic comedy writing journey.
So what is romantic comedy?  It’s a boy-meets-girl, falling in love story.  And as we know from as far back as Greek Tragedy, falling in love never goes smoothly.  People do strange things when cupid’s arrow strikes.  As much as any sensible woman knows that true love should be more than skin deep, she will probably decide her bum is too big and go on a crash diet – and then indulge in copious amounts of pleasure-inducing chocolate-coated endorphins when the relationship goes wrong.
Men flounder when love throws their carefully organised emotions into chaos.  Suddenly, they’re indecisive.  They don’t know what women want.  They’re vulnerable.  They’re human.
Based on my own experience then, along with feedback from publishers and agents, we have to stay away from slapstick and keep our characters real.  When we laugh at characters in a romantic comedy, we’re actually laughing at ourselves.  We’re amused because it’s familiar, comedic or embarrassing situation we could – maybe have – found ourselves in.  That heart-freezing is-my-dress-tucked-in-my-knickers moment when exiting the loo at a posh do?
So, we’re highlighting the situation with caricature, yes, but in order for the parody to work, our characters need to be fully formed people our readers can relate to.  Sex And The City pulled it off beautifully but, in reality, most women have never owned a Jimmy Choo shoe, nor could they aspire to.  If a woman is a secretary, home-maker, mother, care-giver or bank-teller, she’s not likely to have a wardrobe stuffed full of designer – unless she’s robbed the bank, of course.  Hmm?  Could  there be a story in there somewhere?   Your heroine might be the ditzy blonde no man understands. She might be uber-efficient but emotionally deficient, but she has to have depth.
To illustrate my point – and at the risk of blowing my own trumpet, I’d like to use a couple of snippets from reviews for one of my books, Somebody to Love, a story around a single father and his autistic little boy:
Characters jump of the page & make you instantly care about them. Captures the essence of love, life, family & highs and lows of parenting a special needs child.
Jonty -  Associate Reader/Reviewer at Loveahappyending.com

…Autism spectrum disorder - the child in question quickly became my favourite character.
Me, My Books and I

Sheryl’s writing is fabulous. She manages to make you laugh out loud constantly and her stories are so natural and true to life.
All things Books – Kim The Book Worm

I feel that this story has been written with real warmth and heart, with a wry humour at the ups and downs that life throws at people.
The Little Reader Library

Time and time again, these lovely reviewers talk about the ability to portray real people they can relate to.  Women, as we know, come with a whole gamut of emotion, as do men.  They are real people with all the faults and flaws on show.  Someone your reader identifies with and wants to get to know.
Readers want compelling characters, people they care about.  They might seem to be incompatible, they might think that they are, but we need to believe love will find a way.  The might start out as emotionally vulnerable, incomplete people with necessary inner and outer conflict – think Notting Hill.  William and Anna, worlds apart and the odd stacked against them.  Plenty of outer conflict there.  The inner conflict? Could a lowly bookshop owner from Notting Hill ever really be good enough for a film star from Beverley Hills? Could Anna ever hope to make him see she was ‘still just a girl standing in front of a boy, asking him to love her’?  Basically then, we need to see the characters conflicts.  We need to see them confronted and ideally resolved by the relationship.
And so, to the climax. Again, keep it real.  Unless you can come up with a fresh take on kissing in the snow in your underwear, chances are it’s already been done, and done well.
In summary, Romantic Comedy tends to follow a formula: boy meets girl, boy gets girl, despite all obstacles, eventually.  The difficult bit is making your reader laugh with your character as he/she falls over those obstacles, because the reader is empathising with the character, because they’ve been there.
Happy writing! 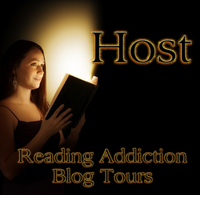 Disclosure of Material Connection: I am a member of Reading Addiction Blog Tours and a copy of this book was provided to me by the author. Although payment may have been received by Reading Addiction Blog Tours, no payment was received by me in exchange f
or this review. There was no obligation to write a positive review. All opinions expressed are entirely my own and may not necessarily agree with those of the author, publisher, publicist, or readers of this review. This disclosure is in accordance with the Federal Trade Commision’s 16 CFR, Part 255, Guides Concerning Use of Endorcements and Testimonials in Advertising*

Beth, thank you SO much for showcasing my work so beautifully. Re the review, I note you have had some health problems and hope things improve very soon. Don't worry, look after you and have a lovely Christmas! :) xx

Fabulous post, Sheryl, and your sense of humour, great wit and astounding perseverance is as obvious in this guest blog as it is in your characters and your writing. Awesome to see you here today, rock on!

Thank you Sheryl. I will contact you when I post my re view. I will finish the book and I will post a review for you. Enjoy your Christmas as well!

Thanks for posting Nicky...much appreciated! Christmas wishes for you and yours too!

Lovely interview Beth and Sheryl! Sheryl is one of my favourite romcom authors - laugh out loud moments, but lots of heart!

Thanks for commenting Linn. Hope your Christmas is fabulous!

Thank you all so very much for taking the time to leave such lovely comments! I must admit I've been struggling with my juggling lately and dropping a few balls.:) The support of fellow authors, readers and reviwers is therefore hugely appreciated (it always is, but sometimes it makes it all sooo worthwhile). Beth, THANK YOU. I know you have an awful lot on. Please just take your time and make sure to have a relaxing, ejoyable Christmas (if you can!) :) xx