My Review of Sever by Lauren DeStefano 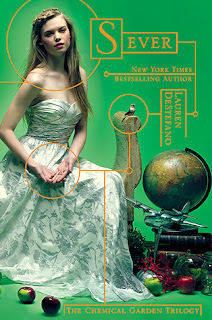 As most trilogys go, the final book will generally answer all of your unanswered questions and then some.  I became somewhat disillusioned with this trilogy about half way through the third book, Sever.  I can honestly say, I do not care for dystopian reads.  Life is depressing enough without reading about the misery of young people who due to a genetic "virus" will not live past age 20 or 25.

The book is well written and once I got to the halfway mark, I picked up interest in learning how the dots were connected.   The author had created a true dystopian setting but it became obvious that Rhine had held some hope in her heart and apparently she was unaware of that hope herself.   She was practical and she was also more open to change than I would have guessed.   In the year she spent away from her brother she had matured, and had allowed resentment and anger to grow and flourish within her.   But Rowan had been exposed to lies about her death(that wasn't).   He had a totally different perspective of the man Dr Ashby was.   Somehow, Rhine remained open minded enough to be still and learn some truths she was totally unaware of.

Secrets from the past were revealed and contributed to the happenings in this third book.    And there is something about the way Lauren DeStefano crafts her words and story that draws the reader in.  I am glad I finished the trilogy and I am satisfied with the conclusions.

However, I go in search now for something light and fanciful for my next reading adventure.

I haven't even begun this series, but I heard it's really good! I keep pushing it off, but thanks for reminding me LOL. I'm bumping this series up on my to-read list. Thanks for sharing! (:

Good, I'm glad you will read it, Lauren is an incredible author and I love her writing style!