Fate Fixed/Blood Twist by Bonnie Wheeler/ 2 Reviews for the price of one!!

Bonnie Erina Wheeler is a lifelong resident of New England and a University of Connecticut student.

Having grown up in Berkshire County, Massachusetts, Bonnie discovered her love of writing early on, but did not begin writing novels until May 2011. As the daughter of author, Glen William Ruane, storytelling and world building is a family affair. Bonnie’s daughter, Miranda E. L. Wheeler and son, Robert D. Wheeler, share in the family’s passion and have both published in the last twelve months.

When not in class or working on her next novel, Bonnie enjoys spending time with her husband, Jerry. Together the two have been writing their own special love story since marrying in April of 1995. Their children Miranda, Justin, and Bobby give them great joy. Their family is made complete with the addition of Petey, a Spanish water dog, they adopted from their local pound.

Bonnie’s plans for the future include writing more novels in the Erris Coven Series, as well as, writing several contemporary young adult novels that have been in development for some time. 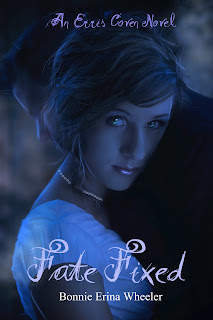 When Lexie Anderson’s mother suddenly announces she is marrying a Romanian immigrant, Lexie willingly leaves behind her busy life in Connecticut for her penance in “The Moose Capital of the World.” Small town living is strange enough, now Lexie must cope with her overbearing stepfamily monitoring her every move. They disappear into the woods at night and keep a strange secret locked in their shed. Her once calm mother is now having violent outbursts and Lexie’s little sister is hearing sinister sounds coming from the forest behind their new home. Lexie’s biggest surprise comes when she discovers the boy she has been dreaming about since her accident is living in Maine. Despite Torin’s questionable reputation, Lexie cannot resist the physical and emotional attraction pulsating between them. Animals and people in town are turning up dead and Lexie learns the strange new world she lives in has real life monsters. Just when she decides she wants to be with Torin forever, she must fight to protect her mother and sister from being harmed by a formidable evil.

From My Perspective:
I am not a paranormal junkie.   I don't like the idea of vampires or werewolves.    BUT, I try to be a diverse reader and I try to be open minded.   Young people seem to love, no absorb with love, the paranormal and I have grandsons who enjoy zombies and the paranormal in video games more so than books.  So how does a Grandma relate?

I was supposed to read Fate Fixed and Blood Twist months ago for a blog tour  but I was sick at the time so the reading stopped and the review for Ms Wheeler's books didn't get posted.   Wish I had felt up to it at the time, because I really did enjoy Fate Fixed!   The story was captivating and kept me on the edge of my seat.    How romantic is it that the protagonists dreamed of one another for several months?   Be still my beating heart!!   That in itself was breath taking!   And when young Lexie's mother remarried, all kinds of unexpected changes occurred.   The Family moved, Lexi not only had her sister Ella, she now had 3 stepbrothers, and the man of her dreams was Real!!   Adventure and suspense was abundant right up to the very end and if I told you more, I'd surely have to hurt you.

Ms Wheeler knows how to capture your attention and hang on to it with her writing skills and I am now looking way forward to reading her second book in the Erris Coven Series, Blood Twist.  4 WINKS peeps!  It's more than just good! 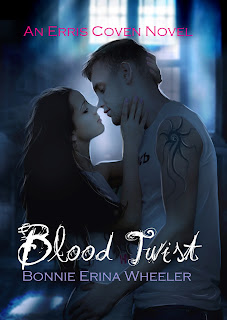 From Bonnie Erina Wheeler, the author who brought you Fate Fixed, comes the second installment in the Erris Coven Series, Blood Twist.

Find out what happens to the Erris Coven when Lexie's BFF Liz comes to town.

Braden Murphy knew he was going to die. There was a twist to his family secret – one that was forced upon him from the time he was a child. For years he envisioned his final days and tried to be strong enough to leave his family. Now that it was time, he was ready to make good on a deadly promise. Except for one unexpected glitch, a raven haired beauty insisted on joining him.

Liz Sanders thought her best friend’s stepfamily was weird, but she never would have guessed they were werewolves. Now Liz must travel with a secretive half-vampire in search of a lycanthropy cure. Landing in a nest full of blood thirsty vampires wasn’t on the agenda, but neither was falling in love.

Braden is tempting, but Liz’s feelings for him are complicated. She wishes he would open up about his past and give her a reason to trust him.

Just when Liz thinks she can let her guard down, she’s forced to confront the evil that has been stalking Braden’s past for years. Death is here and ready to destroy everything they've fought to save.

I knew I would be getting to bed late tonight as I wanted to read and finish book two of the series, (Erris Coven Series).  Blood Twist picks up right where Fate Fixed left off.   Lexie's BFF from Connecticut has arrived to help Lexie out and insists on traveling with handsome Braden Murphy to Ireland to receive the cure for lycanthropy for Lexi's infected mother.   To Liz's surprise, they end up in Vancouver Canada????

While there, Braden confronts Riley, his older brother.   Riley had turned, as do all half-vampires, but he crossed to the dark side when he was unable to stop himself from drinking human blood.  He longed to be accepted by his family and so he called for Braden to meet with him.    Braden had expected to die with this meeting, but after traveling with Liz a fierce attraction developed between the two of them and Braden had to make her leave, so he could fight to the death if need be and not be worried about her safety.   But Liz had other ideas.....

Again we had a lot of action adventure and a charming romance when we read Blood Twist; and many surprises .   Just who was this Death character and what were his motives?    You'll have to read it for yourself to find out,    I enjoyed Blood Twist, but also found myself mildly distracted by several spelling errors:
our for hour, their when there is the correct version etc.    Bear in mind I was reading an ARC copy, so hopefully someone proofed for final edits.

Based on the fast pace of the book and the story that was told, I still rate this a
4 wink read.   I found it very enjoyable.