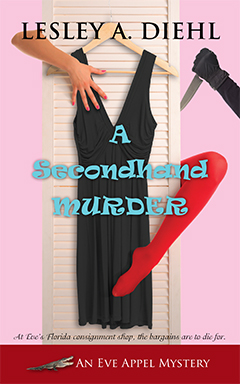 Spunky and outspoken Eve Appel moves from Connecticut to rural Florida intent on starting a new life, free of drama, and more importantly, her soon-to-be ex-husband. The rural Florida town of Sabal Bay, situated only an hour from West Palm, proves to be the perfect spot for her consignment store. Thanks to the recent economic downturn, Florida’s society matrons need a place to discreetly sell their stuff and pick up expensive-looking bargains. But Eve’s life, and her business with it, is turned upside down when a wealthy customer is found stabbed to death in a fitting room. As accusations fly and business slows, Eve decides to take things into her own hands. With the help of an unlikely bunch of friends—including her estranged ex, her best friend, a handsome private eye, and a charming mafia don—she struggles to find answers and save lives. Through a maze of distorted half-truths, dramatic cover-ups, and unrequited passions, Eve learns just how far the wealthy will go to regain what they have lost. A Secondhand Murder is Book 1 of the Eve Appel Mysteries Series.

A Secondhand Murder was a delightful read.  It was a mystery that had a substantial list of suspects and the story was definitely character driven.   The writing was smooth and easy to follow from start to finish; but the characters were the shining star for this book.

I enjoyed following Eve as she first encountered the murder at the secondhand store and then threw herself into the investigation to resolve "whodunit" before the store was ruined by bad publicity and gossip.  The story was interesting and it was quite late in the book when the reader realized who the culprit was.  Eve's friends and family who helped her were quirky,loyal, some inept, some professional and comical.

Although I enjoyed the read, there were some things that were reminiscent to the Stephanie Plum series by Janet Evanovich, i.e. both heroines experienced their cars being blown to smitherenes.  Both heroines had grandmothers who sought adventure with their grand-daughters.   I was also taken aback with the PI Alex Montgomery.   I just couldn't picture him as moping after the heroine.   But those were the only things that bothered me about the story.   Overall, I found it very enjoyable and I will look forward to the next book in the Eve Appel Mystery Series.   I rate this book at four winks!

And for my followers, there is good news!   The author has graciously offered up a free E-Copy of her book for one lucky winner of the rafflecopter below.    So if you love great characters, several twists and turns in you mystery,  and a touch of comedy,  sign up below.    It may just be your lucky day!
Good Luck my Peeps!
a Rafflecopter giveaway

It was still early so I strode back into the restaurant, indicated to the hostess I wanted a booth and ordered the breakfast buffet. Anger paired with disbelief gave me a hearty appetite. Returning to my booth after loading my plate with eggs, bacon, pancakes, pastries and a slice of toast, I noticed someone had joined me for breakfast. He was seated with his back to me as I approached the booth but I recognized the sun-streaked hair curling over his collar. My favorite PI. I almost dropped my plate. “Hi.” I tried for nonchalant but sounded more like a hormone-addled teenager. “Saw you come in. I guess you had an early morning chitchat with the local gendarmes.” “To be continued this afternoon at the station.” “Fingerprints?” He stirred a packet of sugar into his coffee. “Nope.” The tingle in my tummy was more than simple hunger for food. I tried to satisfy it by stuffing a large forkful of pancake into my mouth. I nodded and swallowed. “Like anyone would be dumb enough to leave their prints.” “Certainly, we know you’re smart.” “I had no reason to kill Mrs. Sanders. That would be like killing the golden goose.” “You didn’t like her very much, did you?” I dropped my fork on the plate. “What do you mean? I hardly knew the woman.” “So you say, but my sources indicate that’s not the whole story.” He stared at me. Last night I thought those azure eyes looked inviting. Now they looked more like ice. He smiled. “You said you were investigating Mrs. Sanders. Sounds like you’re trying to nose into my affairs. Why?” “Don’t get mad. I’m not accusing you of murder, you know.” He took a sip of coffee. “I’m not mad.” I was a little miffed, peeved even, but not really mad. Okay, I was mad. “Oh yes you are, and when you get angry, you stick your chin out and turn your head ever so slightly to the right. Your cheek twitches, probably from clenching your teeth. Did you know that?” I had lost my appetite. I grabbed my purse and slid out of the booth. “I don’t recall inviting you to join me for breakfast. I just remembered I have an important appointment.” “That would be ...?” He also stood. “That would be none of your business.” I stalked out of the restaurant, then remembered as I approached my car that I had forgotten to pay my bill. Damn. Now I’d have to go back in there and face him again. I gritted my teeth, stuck out my chin and slammed through the door. He turned from the counter, credit card in hand. “Don’t worry about it. I got it. Your treat next time.” “There won’t be a next time.” I spun around and pushed open the door. By the time he reached his car, I was already starting my engine, wondering what the man knew about Mrs. Sanders and me.

Lesley retired from her life as a professor of psychology and reclaimed her country roots by moving to a small cottage in the Butternut River Valley in upstate New York. In the winter she migrates to old Florida--cowboys, scrub palmetto, and open fields of grazing cattle, a place where spurs still jingle in the post office. Back north, she devotes her afternoons to writing and, when the sun sets, relaxing on the bank of her trout stream, sipping tea or a local microbrew. 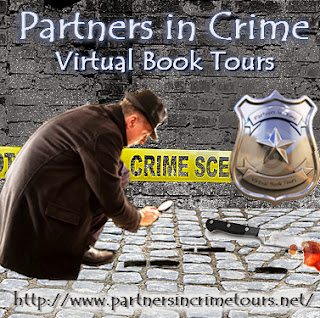 Thanks so much for your thoughtful review of what seems to be an exciting mystery story! And thanks, too, for providing an excerpt so we can get a chance to see for ourselves.

One of my favourite authors is Lisa See, however, I love mysteries and my favourites are Erica Spindler, Joy Fielding, Wendy Corsi Staub, Frederick Lee Brooke, just toooo many to name.