The Hypnotist by Lars Keplar--A Review

Good Morning fellow reading Peeps!   I hope you are all doing well this fine AM.   I have endured another sleepless night, so hopefully, I will not get too punchy with this review of Lars Kepler's book, The Hypnotist.    It is not a book to get punchy over. 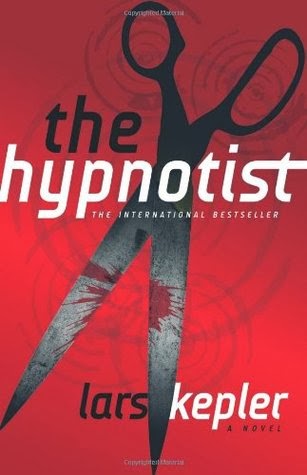 
Prepare for The Hypnotist to cast its spell
In the frigid clime of Tumba, Sweden, a gruesome triple homicide attracts the interest of Detective Inspector Joona Linna, who demands to investigate the murders. The killer is still at large, and there’s only one surviving witness—the boy whose family was killed before his eyes. Whoever committed the crimes wanted this boy to die: he’s suffered more than one hundred knife wounds and lapsed into a state of shock. Desperate for information, Linna sees only one option: hypnotism. He enlists Dr. Erik Maria Bark to mesmerize the boy, hoping to discover the killer through his eyes.
It’s the sort of work that Bark has sworn he would never do again—ethically dubious and psychically scarring. When he breaks his promise and hypnotizes the victim, a long and terrifying chain of events begins to unfurl.
An international sensation, The Hypnotist is set to appear in thirty-seven countries, and it has landed at the top of bestseller lists wherever it’s been published—in France, Holland, Germany, Spain, Italy, Denmark. Now it’s America’s turn. Combining the addictive power of the Stieg Larsson trilogy with the storytelling drive of The Silence of the Lambs, this adrenaline-drenched thriller is spellbinding from its very first page.

This is definitely a page turner of a book.  It captivated my interest immediately and I couldn't wait to get back to the book each and every night until it was finished.  I am convinced this was a truly great thriller.    Two mysteries are contained within the pages....Who killed the three family members?    And who kidnapped the hypnotist's son?

I really liked that most of the chapters were short and then quite unexpectedly, there would be a longer chapter.  The characters were shaped and well developed.  Joona  Linna was a Swedish Detective
with an obsessive need to hear the words, "you are right".   Erik Maria Bark was a psychiatric hypnotist researcher who depended on too many pills to aid his sleep and had a sobering relationship with his wife, Simone or Sixan.    She leaned more on her father for help than she did her husband.   It was all quite understandable as I journeyed from beginning to end.   With the odd assortment of patients Bark dealt with it was indeed a psychological thriller and had this reader gripped and breathing heavy throughout the read!

Disclaimer:  I read for my pleasure.   I may receive ARC copies for review purposes, but I am not compensated for my reviews .  I like to read and I like to share my reviews.   I post my thoughts without prejudice or bias.  The words are mine and I write reviews based on my humble opinion.  I will admit, I seldom meet a book I don't like.   I purchased this book for my own collection and enjoyment.