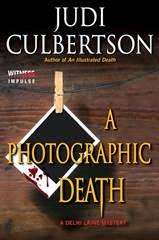 This book is set to be released as of 5-27-14, so it should now be available.
I just finished the tale but my grandkids were not cooperating at all in allowing me to concentrate.     Of course that novel would be called, Killing Grandma...A Slow and Torturous Death!   LOL.    Reading is best done alone.

Bookseller-turned-amateur detective Delhi Laine is back with another atmospheric mystery, but this time, it’s a family affair…

Nineteen years ago, Delhi Laine’s two-year old daughter disappeared. After a frantic but inconclusive search, authorities determined that she must have drowned, her body washed away from the picturesque English park in which she was playing.

Delhi’s heart has never healed, yet her family has since soldiered on. But when a mysterious letter arrives containing the ominous words, YOUR DAUGHTER DID NOT DROWN, their lives are once again thrown into turmoil. With her family torn between fighting for the past and protecting the future, Delhi is caught in the middle. For a mother, the choice to find her daughter seems easy. But for a family left fractured by the mistakes of the past, the consequence, and the truth, may be infinitely more costly.

A PHOTOGRAPHIC DEATH takes readers deeper into Delhi’s turbulent emotional and family life, while still maintaining the series’ renowned bibliophilic charm. It is preceded by A NOVEL DEATH, a USA Book News finalist for Best Book of 2011, and AN ILLUSTRATED DEATH, published by Witness Impulse in October 2013.

One of my biggest fears when I was a young mother was that someone would steal my  children.  What would have made it worse, would have been if the abductor was some one I knew.   I do not know how people get through something like that.

Judy Culbertson gives us a look into Delhi Laine's personal life through  A Photographic Death   Granted it i a fictitious mystery, but it certainly deals with a truly poignant worry most mothers are concerned with.   Delhi was an interesting and strong character and I was quickly emerged and engrossed with her story.  A mother of three when her twins were two years old and pregnant with her fourth child, an afternoon at the riverside park had turned into a mother's worst nightmare.   While she was taking photographs, one of her babies, disappeared.   Supposedly drowned in the nearby river.

Nineteen years later she received a letter stating that her baby had not died that day.   What lengths would you go to if it were you?    Where would you begin your search?  The story was superbly told, fast paced and extremely satisfyimg.   As a first read for me of Judy Culbertson's work, I will not hesitate to  look into other works from her.

I rated this a 5 Wink read!