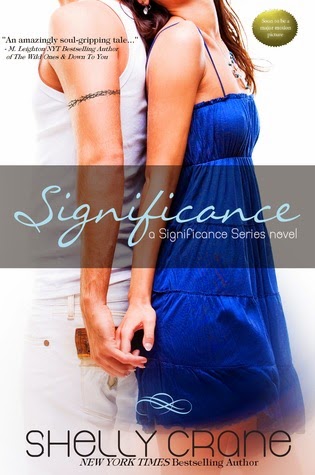 I tell you, there are some fabulous authors out there addressing young adult love, fantasy,  and issues.    Awhile back I got very involved in the YA genre and then moved onto adult romance stories and women's fiction.     But with trying to clear out my kindle collection this month, wow, I guess I bought several I had forgotten about!

We went to see If I Stay in a movie theatre near us on Friday and we cried like babies throughout it.    But it was a good movie and I so seldom go to a movie before I read the book, but I also bought the book that day, so now I can compare and see how they changed the book, (never to my satisfaction).

Anyhoo, on with today's review of   Significance by
Ms Shelly Crane.

Maggie is a seventeen year old girl who's had a bad year. She was smart and on track, but then her mom left, her dad is depressed, she's graduating - barely - and her boyfriend of almost three years dumped her for a college football scholarship. Lately she thinks life is all about hanging on by a thread and is gripping tight with everything she has.
Then she saves the life of Caleb and instantly knows there's something about him that's intriguing. But things change when they touch, sparks ignite. Literally.
They imprint with each other and she sees their future life together flash before her eyes. She learns that not only is she his soul mate, and can feel his heartbeat in her chest, but there is a whole other world of people with gifts and abilities that she never knew existed. She herself is experiencing supernatural changes unlike anything she's ever felt before and she needs the touch of his skin to survive.
Now, not only has her dad come out of his depression to be a father again, and a pain as well, but Caleb's enemies know he's imprinted and are after Maggie to stop them both from gaining their abilities and take her from him.
Can Caleb save her or will they be forced to live without each other after just finding one another?

Young Adult Fantasy fun is what Shelly Crane wrote about in Significance and what a sweet ride it was!   The heart of every lover is so incredibly written into this wonderful story.   Who wouldn't want to imprint with their significant if it meant finding their true soulmate, being loved so unconditionally and knowing each other inside and out.    Mercy, fan the flames.....I could go for a love like that!

Crane's characters, specifically, Maggie and Caleb were beautifully developed and so very enticing not only with one another but with the reader as well.   They were strong and accepting and so young and vulnerable.   Caleb took his role as Maggie's protector so seriously and Maggie found herself in the position that she needed him to take it seriously.    Other interesting and quirky characters included Gran who could heal and remove offense burns, she herself a human married into the Jacobsen clan.   Then there was Chad, an ex-boyfriend, who found out too late that Maggie was indeed a love-love interest and Kyle, Caleb's cousin and best friend's, love for Maggie.   He got to be quite obnoxious about his unchecked feelings  as did Maggie's own brother, Bish.   Her parent's relationship had deteriorated beyond repair while the Jacobsen's had never experienced anything close to divorce or a falling out.   Rack up ten points for the Aces!   So of course, that only drew Maggie closer in accepting the "imprint".

The story line seemed extremely well done as of course with clans, you know there were always warring factions.  No one from any clan had imprinted in several years, so there were no ascensions and no abilities to be gained.  But when it happened to Caleb and Maggie, there were those who did not want the ultimate ascension and abilities to be attained.  Lots of planning and plotting had to occur to make this story flow fluently and it did.

For me reading Significance was the epitome of escape from reality and I thoroughly enjoyed this read.   And dang it if I won't be sweetly 'coerced' into buying and reading the rest of the story!  (Poor Me).

I rated this a 5 wink read as I just could not wait to rejoin the characters to finish what we started.

Disclaimer:  I read for my pleasure.   I may receive ARC copies for review purposes, but I am not compensated for my reviews .  I like to read and I like to share my reviews.   I post my thoughts without prejudice or bias.  The words are mine and I write reviews based on my humble opinion.  I will admit, I seldom meet a book I don't like.  I purchased this book on Kindle for my personal collection.