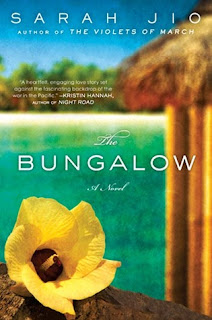 I read Sarah's The Violets of March and knew, she was an author I would follow...forever!  That was her first book and The Bungalow was her second novel.  I was not disappointed in this book one bit.   In fact, sometimes a second book doesn't measure up to the joy you found in the first book.   That was not the case here.   I think The Bungalow actually surpassed the first.   I was so impressed with the story.

Again it took a couple of chapters to cement my interest, but once it happened, I was hooked.   The Story took place during WWII on the tropical island of Bora-Bora.   Two thousand soldiers stationed there and forty-five nurses.   It's a story full of self sacrificing men and women doing horrific work under tremendous stress.   The island had its own way of changing a person.  Anne Calloway felt a calling to go with her friend Kitty Morgan to serve their country and provide nursing care to the injured soldiers.  But there was much time for other activities as well.   Gerard Godfrey, Anne's fiance' back home, waited for her and then felt the call to sign up for action himself....a bit stuffy at first, then patriotic and always faithful and loving of Anne.   Anne tried to remain loving and faithful, but she hadn't reckoned on Westry, or betrayal , murder, such sadness and sorrow as they encountered on the island.

This book took me to the tropics and the war.  I felt the pain and suffering and I shed tears.  But despite all the turmoil of the war,  Anne lived to find justice and redemption and love.  This book  is  enthralling!   And I absolutely rate it as excellent!!

Now I have to reserve her next Novel, Blackberry Winter, to be released September 25, 2012.
I am just booking my life away!!!!

sounds like a really good book. Thanks for sharing.

My Pleasure....reading is my guilty pleasure!

Jill of All Trades said...

I haven't read The Violets of March yet but loved The Bungalow. Oh I will watch for her next one and get to reading the first one.

I wanted to read The Bungalow so bad but just got caught up in so much other reading. Nice answer (:

Sarah is one heck of a fine author! thanks Ladies!