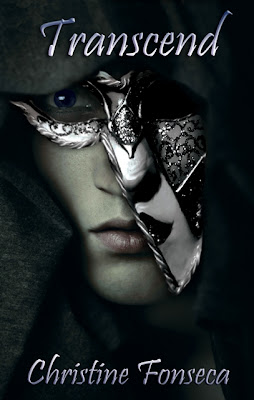 All seventeen-year-old composer Ien Montgomery desires is an escape from his family's rigid expectations for his life; someone to inspire his music. When he meets a beautiful violin-prodigy, Kiera McDougal, his life music takes on new life. With her, he imagines a future outside of his parents’ control. That is, until a horrible accident tears them apart.

Sent to die in a sanatorium, Ien’s obsession for Kiera grows unbearable. Tortured by thoughts he can’t escape and the truth of his monstrous disfigurement, he flees, desperate to exact revenge on the people that ruined his life – his parents. But, vengeance is empty. Betrayed by those closest to him, Ien discovers that the price for his happiness may be his sanity.

Set amidst the landscape of New York's Gilded Age, and inspired by Phantom of the Opera, TRANSCEND exposes the fine line between love and madness.

“So powerful, so deep, and dark. It took me on an amazing journey into places most people fear to go...leaving me breathless.”
~Heather McCorkle, Author of To Ride A Puca

“…hauntingly dark and achingly beautiful. A story of love, loss and obsession set against the decadent backdrop of historic New York that sucked me in and wouldn't let go, from the first page until long after I'd finished.”
~ Michelle McLean, Author of Treasured Lies (Entangled, 2012)

“ The story is disturbing and intense and utterly unique…”
~ Ali Cross, Author of Become

“…thought-provoking and emotionally heart wrenching. I haven’t felt this way after reading in quite a while!”
~ Jen from Geekygamergal's Musings

“It is such a powerful and deep story; it will leave you completely breathless.”
~ Brooke from The Cover Contessa

Availability:
Publisher: COMPASS PRESS
ISBN: 9780985180478
Goodreads - http://www.goodreads.com/book/show/13559187-transcend
Buyer information will not be available until mid-Sept, but it will be available through Amazon, Barnes and Noble, and other fine retailers.

School psychologist by day, critically acclaimed YA and nonfiction author by night, Christine Fonseca believes that writing is a great way to explore humanity. Her many titles include TRANSCEND, DIES IRAE, LACRIMOSA, MEA CULPA, and in nonfiction: 101 SUCCESS SECRETS FOR GIFTED KIDS and EMOTIONAL INTENSITY IN GIFTED STUDENTS.
When she’s not writing or spending time with her family, she can be sipping too many skinny vanilla lattes at her favorite coffee house or playing around on Facebook and Twitter. Catch her daily thoughts about writing and life on her blog.

Thanks so much for helping to spread the word!

This is already on my TBR list! Can't wait to get to it! :D