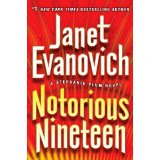 The nineteenth edition in the Stephanie Plum series---I look forward to the  the annual publication of at least one edition.    Ms Evanovich has had me laughing for years at the witty adventures of  her gal, Stephanie.   Sometimes though of late I wonder if my funny bone has taken a wrong turn or if Ms Evanovich is a bit tired of her funny bond agent.    Maybe that just happens after a long run.

It's still a great read and if you are not familiar with this series, you should at least read one or two of the Plum editions  for your own pleasure if nothing else.   Stephanie Plum is an accidental bond agent, who does not like carrying a weapon and she has a propensity for attracting car bombers.   Her sidekick is the well endowed (everywhere) Lulu who used to be a 'Ho' and wears bright colored spandex and high heels.   Their favorite fast food is Cluck in a Bucket.   Stephanie's Grandma Mazur is a hilarious old woman who says anything and everything and wants desperately to be a part of Stephanie's Posse.   In this edition she goes undercover at the hospital to help locate a missing patient that abscounded with millions from the old folks home and skipped out on his bail.

In addition to the missing skip, Lulu and Stephanie apprehend a skip after  disrobing to enter and disrupting at a nude beach.    Stephanie makes off with a Tiki in order to lure another skip to find her so she can maybe (NOT) apprehend him.    As if all this isn't enough, Stephanie is somehow recruited to be the matron of honor for a bride she just met through Ranger.   Ranger and the groom have both received death threats and Stephanie is hired to protect Ranger.....yeah, right!

Ranger is the Hot Cuban Security Co. owning bondsman who has taught Stephanie a lot...both in apprehension and well other things.   He has also rescued her from many a dangerous criminal and in her efforts to keep from walking, (furnishing rides when her cars burn).     Detective Morelli, (Joe) is her on again/off again Italian boyfriend.    And all of this originates from Trenton, New Jersey.

I love this series.   Janet has made characters come to life in the pages of these books and it feels like I know them personally.....don't I just wish!   Her stories are favorites and a quick read and something to look forward to each year.

Much as I sometimes feel I've hit a rut in the road, I will always love Stephanie and friends!    Many of these stories have caused hilarious outbursts of laughter at the oddest times and places. So do yourself a favor and enjoy a Plum mystery for yourself!

Disclaimer:  I read for my pleasure.  I purchased this book and these words are my thoughts put to text.  I like to read and I like to share my reviews.   I post my thoughts without prejudice or bias.  The words are mine and I write reviews based on my humble opinion.  I will admit, I seldom meet a book I don't like.

I think it's always a pleasure to read a new book, this one was really nice like always.

I couldn't agree more Melliane. Thanks for dropping in!

I still have not checked out an Evanovich book, what is wrong with me right? I really do want to read a Plum book soon. I tried to recently watch the movie of One for the Money and it just didn't hold my interest, but I know that the books are always better. I am glad to hear that this series is still going strong for you, Beth.