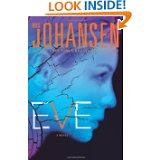 I enjoy a good mystery/thriller and had previously read Johansen's Chasing the Night. So Naturally when she came out with this trilogy of Eve, Quinn, and Bonnie--I had to get in the middle of it. The first in the trilogy has left me hungry for more! Eve is a most serious teenager who wants nothing more than to leave the projects and make something of herself. She has a plan, but then she crosses paths with John Gallo and he threatens everything she has so carefully planned. John is intriguing, he knows what he wants and he will not give up. And he wants Eve. The first part of the book explores their physical/sexual relationship, (in far greater detail than I appreciate). However, they part ways when he enlists in the military and she later learns he was killed. Meanwhile Eve finds herself pregnant despite their self reliant protection against pregnancy.

Bonnie, the baby, turns out to be Eve's everything and is kidnapped and presumably murdered at age 7. Eve becomes obsessed with finding the killer and bringing Bonnie's body home. Who is the murderer? Paul Black tops the list, but John Gallo has returned from the dead...could he somehow be involved? It's a fast and tense read with a lot of violence. And we're left to search for more answers in book #2, Quinn.
Posted by Unknown at 5:56 AM