Good Morning Peeps and fellow readers!   Did you all enjoy your Thanksgiving yesterday?   Thirty three years ago yesterday, I gave birth to my darling daughter...Happy Birthday Amanda!  There was no mystery at all about that event.   She was 2 lbs heavier than her beautiful brother and by the time it was time to push, it was a dry birth and I was exhausted!   And if it hadn't been for her father, she probably would have been born at home as I was sure it was false labor.   There's always a story, isn't there? 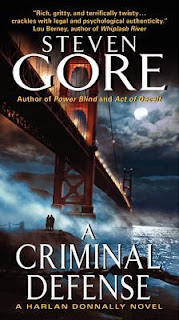 I have a review for you today and we'll start as usual with a synopsis from Goodreads:

Betrayal wounds.Revenge destroys.
Over three decades, Hamlin's practice devolved into just another racket: intimidating witnesses, suborning perjury, destroying evidence, laundering money. But is he the victim of murder—or of a dangerous sexual encounter gone wrong? And when law enforcement believes justice has already been done, who can be trusted to find out?
Once again in the city where his career came to a shattering end, former detective Harlan Donnally resolved it wouldn't be him. He had no desire to immerse himself in the deceit that was Hamlin's career . . . nor entangle himself in the corrupted loyalties that turned the dead lawyer's associates into both co-conspirators and suspects . . . nor make himself the proxy for the hatreds and betrayals Hamlin left behind.
But the presiding judge demanded otherwise—and that might cost Donnally his life.

This was my first read of Steven Gore and  therefore my first Harlan Donnally read.   It was definitely a well plotted mystery as I was clueless until into the last 100 pages or so.  The writing was intense and a bit overwhelming with the number of characters introduced.

I felt the writer presented those of less than ethical character well.  I didn't feel that same representation for Donnally's character.   Other than I perceived he was ethical and faithful to his girlfriend.   I just didn't feel he came across as strong as the bad guy.

I did enjoy the novel, once things started to be narrowing down to who had actually committed the murders and why.


I will definitely try another Harlan Donnally novel to see if I get a better sense of the main character.

I rated this a three wink read.