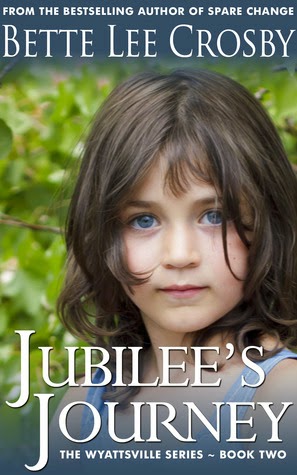 Happy Birthday to my great friend in Colorado, Cherie!!   Love you girlfriend!


Today's review is of one of my favorite author's books.   I love Betty Lee Crosby's work.   Let me begin by saying, Jubilee's Journey did not disappoint. Look at those blue eyes on the cover.   My 2 and a half year old granddaughter has those same blue eyes, but she is a blondie with curls.

Progressing to the SYNOPSIS from GoodReads:

When tragedy strikes a West Virginia coal mining family, two children start out on a trek that they hope will lead them to a new life. Before a day passes, the children are separated and the boy is caught up in a robbery not of his making. If his sister can find him, she may be able to save him. The problem is she’s only seven years old, and who’s going to believe a kid?
Jubilee’s Journey is Book Two in the Wyattsville Series. This story of discovering lost family and finding love reconnects readers with Ethan Allen and the other heart-warming characters of the bestselling novel SPARE CHANGE

January may well be my favorite month of the year to read.  I have scheduled myself to read the books written by favorite authors,,,,Janet Evanovich, Sarah Jio, Debbie Macomber, Shelly Green, Shauna Allen, and Bette Lee Crosby.  I love these women and their ideas and stories.   So blessed by the pen put to paper.

Bette is a master at creating characters.  Some characters as Paul and Jubilee, were innocents.   Others were totally villainous, as was Hurt McAdams.   Most were lovable, and a mix between good and bad, as was Ethan Allen and his grandmother, Olivia Westerly Doyle.  And Crosby's stories have always been endearing.   Paul had such love for his little sister, Jubilee.   With the loss of both parents, Paul was left to care for her.   He accepted that responsibility whole heartedly.    Thus the journey from their mountain home to Wyattsville in search of their Aunt Anita.

As fortune would have it, their simple plan goes awry and Paul and Jubilee became separated once they arrived in Wyattsville.   Jubilee found safety in a boy called Ethan Allen and went with him when Paul did not return.   Paul unfortunately, went to the hospital .   The mystery revolved around finding Aunt Anita...would she accept responsibility for both children?   Did she want them?  Would Paul survive his injuries  and remember enough to save him from a jail term?

Here were two kids leaning one upon the other, so alone in this world and desperate to remain together and yet there were three homes ready to open up their doors to them.   It was a beautifully written story and so very heart warming.

Disclaimer:  I read for my pleasure.   I may receive ARC copies for review purposes, but I am not compensated for my reviews .  I like to read and I like to share my reviews.   I post my thoughts without prejudice or bias.  The words are mine and I write reviews based on my humble opinion.  I will admit, I seldom meet a book I don't like. I received a complimentary copy from the author or the author’s representatives in exchange for an honest review.  I purchased this book.