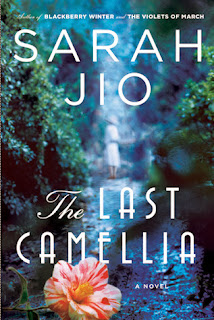 I finished Sarah Jio's The Last Camellia in the wee hours of the morning today-- Which would automatically land it a 5 Wink rating.   I love Sarah Jio's writing and this was no exception.

Sarah takes the past and blends it with the present and somehow out of all the buried truths, she makes a magnificent story that holds the reader spellbound.    I have nothing against camellias, from the cover shot, they are lovely.   In this book we learn a lot about the camellia.   I always enjoy learning something from the books I read.

Sarah alternates chapters past and present.   The past are labeled Flora chapters and the present Addison.   Her characters are brilliant.  Flora leaves New York for England in an effort to find her place in the world and help her parents out of their financial problems with the family bakery.   Her story started in the 1940's.
Addison's Story begins some  sixty years later.   Addison is a garden designer and her husband's family owns Livingston Manor, where Flora's story took place.   Addison came to the manor because she was running away from her past.    These women were strong and human; bold and intelligent.   Each faced her own fears whether it was head on or trying to escape it.    Eventually, they each realized the words inscribed in the front of The Years by Virginia Wolfe were accurate:  "the truth of the matter is that we always know the right thing to do.  The hard part is doing it."   Each woman grew to the point they could and did do the right thing.

Tinged with a sixty year old mystery, the four Livingston children, a faithful and dedicated husband and a couple of scoundrels, one from each time period, this was one of Sarah's best reads yet

And as I stated earlier, it earned the 5 Wink rating.   304 pages read in one day...or specifically through the night!

A romantic and suspenseful tale about two women whose destiny is bound across the years.
On the eve of World War II, the last surviving specimen of a camellia plant known as the Middlebury Pink lies secreted away on an English country estate. Flora, an amateur American botanist, is contracted by an international ring of flower thieves to infiltrate the household and acquire the coveted bloom. Her search is at once brightened by new love and threatened by her discovery of a series of ghastly crimes.
More than half a century later, garden designer Addison takes up residence at the manor, now owned by the family of her husband, Rex. The couple’s shared passion for mysteries is fueled by the enchanting camellia orchard and an old gardener’s notebook. Yet its pages hint at dark acts ingeniously concealed. If the danger that Flora once faced remains very much alive, will Addison share her fate?

Disclaimer:  I read for my pleasure.   I may receive ARC copies for review purposes, but I am not compensated for my reviews .  I like to read and I like to share my reviews.   I post my thoughts without prejudice or bias.  The words are mine and I write reviews based on my humble opinion.  I will admit, I seldom meet a book I don't like.  I did purchase my personal copy of The Last Camellia.