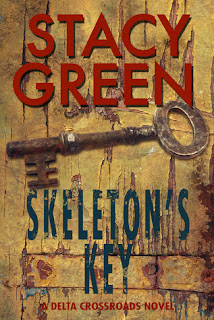 I am starting the year with a bang!   A review of Stacy Green's Skeleton's Key is on tap today!   I found it intriguing and suspenseful!

Cage Foster can’t catch a break. The discovery of a dusty skeleton in the antebellum home he’s caring for is bad enough. But the unearthing of two fresh bodies, buried during his tenure at Ironwood Plantation, may land Cage on Mississippi’s death row. Even worse, the one person certain of his innocence is a pushy Yankee newcomer, a woman who talks too fast and still believes in the romance of the Old South.
A specialist in historical renovation, Dani Evans intends to restore Ironwood to its former glory while she rebuilds her life after the death of her mother. Death, hidden treasure, and falling in love with a murder suspect were not part of the plan. The lure of the infamous Ironwood treasure cache convinces Dani the skeleton is the key to unraveling the legend, and that the treasure itself is the motive for the murders.
Cage is certain an old grudge is setting him up for murder, but the evidence against him is mounting and time is running out. Dani believes she can find the truth before Cage is arrested, but her search for answers will uncover a descent into madness that should have stayed buried.

This was a great read and I enjoyed it immensely!  With each new book authored by Stacy Green, it just gets better and better!This was a wonderful mystery romance read.   Two individuals love an antebellum property called Ironwood.    Cage couldn't afford to buy it, but he was hired to make it livable for the new owner, Dani Evans.   Dani was able to trust Cage immediately but there were strange findings in her new home--a skeleton in the basement, critters in the basement and two dead and freshly buried bodies in the basement, just feet away from the skeleton.   Dani wanted to restore Ironwood to its original glory, but first the mysteries of the basement needed to be solved.    The characters were very well developed and there was an investigator this reader loved to hate.   I also found myself wanting Dani and Cage to fall in love despite the circumstances surrounding them and cloaking them in suspicion.   It was a very well plotted story and maybe I should have figured out who the murderer was, I didn't and that made it all the better read for me.