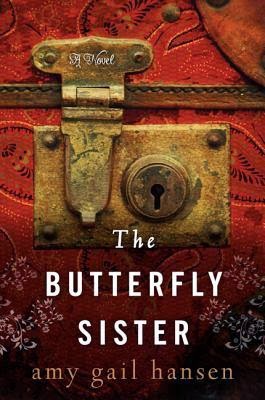 Hello Gang!   We had a beautiful Iowa Day for my niece's wedding yesterday!    She was so lovely in her beautiful white and silver sequined gown!   She sports dark auburn hair and married a ginger as well!   They are an adorable couple....Congratulations Alix and Ben!   Hopefully, their happy vows will reverse the streak of sadness following my family around for the past couple of months!

On to Today's review!!   THE BUTTERFLY SISTER by Amy Gail Hansen was a very interesting read and here;s the GoodReads SYNOPSIS:

"My past was never more than one thought, one breath, one heartbeat away. And then, on that particular October evening, it literally arrived at my doorstep."Eight months after dropping out of Tarble, an all-women's college, twenty-two-year-old Ruby Rousseau is still haunted by the memories of her senior year-a year marred by an affair with her English professor and a deep depression that not only caused her to question her own sanity but prompted a failed suicide attempt.And then a mysterious paisley print suitcase arrives, bearing Ruby's name and address on the tag. When Ruby tries to return the luggage to its rightful owner, Beth Richards, her dorm mate at Tarble, she learns that Beth disappeared two days earlier, and the suitcase is the only tangible evidence as to her whereabouts.Consumed by the mystery of the missing girl and the contents of the luggage-a tattered copy of Virginia Woolf's A Room of One's Own, the book on which Ruby based her senior thesis, and which she believes instigated her madness-she sets out to uncover the truth, not only about Beth Richards's past but also her own. In doing so, Ruby is forced to reexamine the people from her past: the professor who whisked her away to New Orleans and then shattered her heart and the ghosts of dead women writers who beckoned her to join their illustrious group. And when Ruby's storyline converges with Beth's in a way she never imagined, she returns to the one place she swore she never would: her alma mater.

Well, I was thoroughly invested in this psychological thriller and I read throughout the night to finish this work.   I rated it five Winks.   It was very easy to read and follow as it gripped my hearstrings and played them like a harp!   I could easily relate to all the ups and downs of the students at Tarble.  Ruby Rousseau, our main character, fell for her English professor and he, Mark Sutter, certainly had eyes for her too.    Little did she realize she was just one of many students to fall for the Professor's charms.

The old saying, easy come, easy go, usually refers to how fast we can pass money until we have no more, but it equally applied to the love Mark Sutter was passing around.   He loved hard and left them wanting more.   An all girl's school you wouldn't think would encounter a user and abuser of women, but no one saw the threat from within the college faculty.

Believe me, there were turns and twists you couldn't see coming until the truth about another professor was exposed.   When that happened  you felt the angst of these young women who had been manipulated like marionette puppets in the effort to even the score with Mark Sutter.

It was an intriguing tale, well plotted and thought out and it provoked in this reader diverse feelings as I read.
I was angry, I was frightened for the girls, I was sad.   And I was relieved with the ending being what it was.   I would highly recommend this read to anyone who enjoys a psychological thriller.