The Intercept by Dick Wolf--A Review 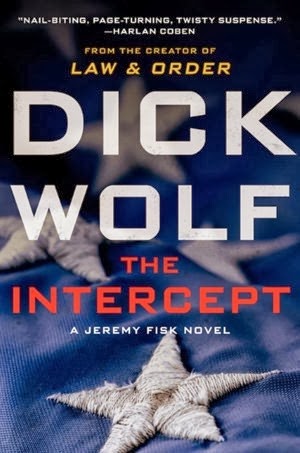 Days before the July Fourth holiday and the dedication of One World Trade Center at Ground Zero, an incident aboard a commercial jet over the Atlantic Ocean reminds everyone that vigilance is not a task to be taken lightly. But for iconoclastic New York Police detective Jeremy Fisk, it may also be a signal that there is much more to this case than the easy answer: that this is just the work of another lone terrorist.
Fisk—from the department’s Intelligence Division, a well-funded anti-terror unit modeled upon the CIA—suspects that the event might also be a warning sign that another, potentially more extraordinary scheme has been set in motion. Fluent in Arabic and the ways of his opponents, Fisk is a rule breaker who follows his gut—even if it means defying those above him in the department’s food chain. So when a passenger from the same plane, a Saudi Arabian national, disappears into the crowds of Manhattan, it’s up to Fisk and his partner Krina Gersten to find him before the celebrations begin.
Watching each new lead fizzle, chasing shadows to dead ends, Fisk and Gersten quickly realize that their opponents are smarter and more agile than any they have ever faced. Extremely clever and seemingly invisible, they are able to exploit any security weakness and anticipate Fisk’s every move. And time is running out.

Spellbinding!  Mind Boggling and a page turner.   I left The Intercept to be my bedtime reading book and that wasn't the smartest thing to do.   I would read until I was thoroughly tense and then I had to read even more before I could settle down and close my eyes,   At one point I was so invested in the story, I felt like I crept into the arms of a panic attack, just empathizing with the Six.    It was so easy to love the six who fought off a terrorist trying to take down their flight.   They were successful in preventing the attack and then became America's newest sweethearts of the day, being hailed as national heroes!

Those police detectives serving to protect the six, and FBI agents investigating the occurence knew there was going to be a terrorist attack on the fourth of July, a national holiday, but who was the perpetrator and what was the target?   The suspense grew steadily and right down to the wire when the treacherous one was revealed.   He had left a bloody trail behind and a sadness for those who so easily gave up their lives and those who went out fighting all the way.   The plot was strong, the intelligence commander was like a cat chasing its tail, until finally, the last piece of the puzzle dropped succinctly into place.   The characters were strong and held the attention of this reader late into the night.

Very happy indeed to have been able to read this Jeremy Fisk Novel and looking forward to the next one.   I rate
this a  5 WINK read!