The Execution by Dick Wolf--A Review and GiveAway 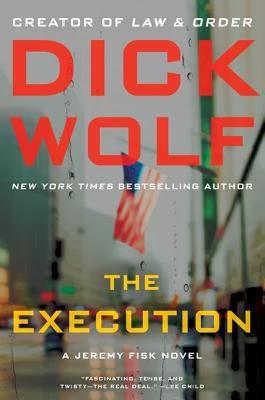 NYPD Detective Jeremy Fisk—introduced in Law & Order creator Dick Wolf’s New York Times bestselling debut The Intercept—must stop an assassin in the pay of a shadowy cartel in The Execution, a tense thriller that superbly blends suspense, politics, intrigue and high-flying action in the tradition of Vince Flynn, David Baldacci, and Robert Crais.
Ten days after the Mexican presidential election, twenty-three bodies are discovered beheaded on the United States border, each marked with a carving of a Hummingbird. Detective Cecilia Garza of the Mexican intelligence agency recognizes it: it is the signature of an assassin called Chuparosa. Garza has been pursuing the killer for years, yet knows little about him, except that he’s heading to New York—with the rest of the world.
It’s United Nations Week in Manhattan and Jeremy Fisk can’t let grief over a devastating loss keep him from safeguarding his city. Complicating matters is the startling news of a mass murder in nearby Rockaway—and the arrival of a disturbingly beautiful and assertive Mexican cop.
To have a chance at finding Chuparosa, these uneasy allies must learn to work together and fast. As they soon discover, there’s more to this threat than meets the eye—and that justice is not always blind.

Second book of the Jeremy Fisk series is The Execution by Dick Wolf.   I think Wolf knows how to spin a great story.   Although the storyline to this second book was rather raw and revolting, it was a great adventure story.  This story had an intensity and detailed imagery.  Jeremy Fisk was basically still in mourning for his girlfriend, Krina Gersten, and he was looking for another line of work.   He had been released back to duty and as any cop will tell you, crime never stops.   He is basically assigned to desk duty and coordinating the over all aspect of United Nations week.

But, Jeremy Fisk is not satisfied with his assignment and gets pulled out to check out some dumped bodies, who are missing their hands, feet and heads....then dumped.   It is the same signature as an assassin from Mexico City.
A female federale' recognizes the signature and wants to be involved in his capture.   Wolf did provide an interesting history for Detective Cecelia Garza which left us knowing more about her than we ever found out about Gersten.   And although there was something between the two of them, they went their separate ways.   I hope in a future story we get to revisit and develop the something between Garza and Fisk.   Again there is a lot of action,
adventure, tension and criminal activity to focus on when reading Wolf's work.   The chapters are many but short and the writing flows easily to capture the reader and keep them baited.   A very good read to be sure!

I rated this book a 5 Wink read.   And for those who follow this blog, we're offering a Rafflecopter giveaway!  One grand prize winner will receive one copy of both of Wolf's Jeremy Fisk books, The Interecpt in paperback and The Execution in hardback.    Plus three runners up will receive copies of The Intercept in paperback.   If you love great crime reads, these books will be right up your alley.   So be sure and sign up for the Rafflecopter and leave a comment on my blog.   Who is your favorite crime writer?   I'd love to know!

I like Erica Spindler as a crime author, her books are leaving me guessing right to the end.