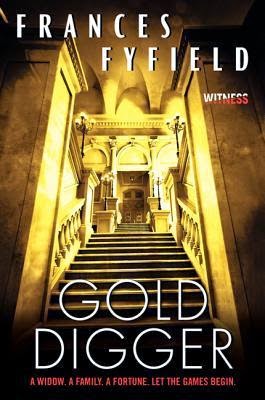 I love reading a book from a new to me author.  Such is today's subject of this blog.   I had never heard of Frances Fyfield, but she will definitely appear in future reviews.

The warmth of him, the glorious warmth, was fading by the minute.In a huge old school house by the sea, full of precious paintings, Thomas Porteous is dying. His much younger wife Di holds him and mourns. She knows that soon, despite her being his sole inheritor, Thomas's relatives will descend on the collection that was the passion of both of their lives.And descend they do. The two needy daughters, who were poisoned against their father by their defecting mother, are now poison themselves. The family regard Thomas's wealth as theirs by right, with the exception of young Patrick, who adored his grandfather and is torn between his parents and Di, the interloper.The family know Di's weaknesses, and she has to learn theirs. After all, she met Thomas when she came to his house to rob him. With the help of an unlikely collection of loners and eccentrics, she sets a trap to hoist the family members on their own greed. And on the night they are lured to the house, Di will be ready.Or will she?

I thoroughly enjoyed Frances Fyfield's Gold Digger.  This was the first of her books I had read; suffice it to say, I was not disappointed.

The characters were unique and refreshing and best of all quirky and damaged.  Thomas Porteus, gentle, a collector, big hearted and misunderstood by most.   He shared his life with Di Quigley Porteus, a thief, his rescuer and his co-collector in the art world.   Jones, a retired cop, uncle of Di who had arrested her when she was young for breaking into the Porteous house in attempts to steal car keys.
Saul, Thomas's friend, believed to be gay, and loved the art world and the collection Thomas had accrued.  Peg, a stray, a runaway with legal problems of her own, taken in by Di and Jones.  Gayle and Beatrice Porteus, daughters of Thomas, hated him and hated Di.  Edward, Gayle's husband, with hungry eyes for all that was belonging to Thomas.   Quig, Di's father, fearing one another with the knowledge they each had on the other.   Patrick, the grandson that loved Thomas and Di.   And Monica, the beautician who was always sticking her nose in where it didn't belong.   Together this awesome cast of characters created a tale of greed, dysfunction, and mayhem.   I loved DI and her supportive cast of misfits and their efforts to protect DI from the dysfunctional family Thomas left behind.

I found the plotline to be entertaining and well plotted;   The characters were strong in who they were and complicated in their actions and desires.   The little secrets along the way, only strengthened the suspense and were revealed in timely essence.    You could feel the solid relationship Thomas had with Di.   I could easily mourn with her, if she would have had time to mourn at all.   But Thomas had thought to protect her from his own well before his death.   It was his plan put in motion that both put her in danger and saved her from it.   Definitely a thrill seekers book from start to finish!

I gave this a 5 Wink rating!