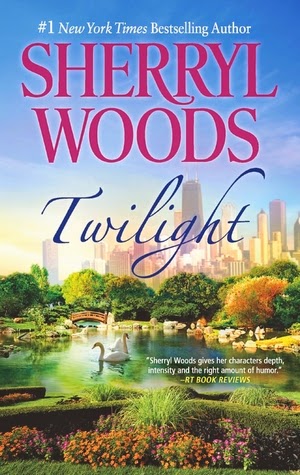 Cloudy and  rainy here in the Midwest.  Can you believe how close we are to the middle of the month?   When you are a reader, the time flies, but you see so many different worlds and books create that passageway.

Today's review features author, Sherryl Woods and her novel, Twilight.    Trust me there are no vampires in this wonderful romance tale, but there is plenty of romance and tension between the characters.

New York Times bestselling author Sherryl Woods demonstrates that when faith and love are tested,they often wind up stronger than ever.

For former private investigator Dana Miller, there can be no peace of mind until she finds the person who killed her husband. Now a single mother to three boys, Dana wants closure. But it turns out she'll need to form an alliance with the man she holds responsible for the death. And uncovering answers may mean bringing down the program her husband believed in.  Rick Sanchez has no intention of letting Dana destroy all the good he and Ken Miller worked for. As he and Dana try to learn the truth about what happened, he discovers that he and his old friend have something else in common; an undeniable attraction toward this intrepid, high-spirited woman who fights for the people she loves.

My mom gave this novel to read; her favorite genre being romance, clean romance.   I enjoy romance reads and have a couple yet to read this month.   Like her I do not really want the explicit details, I have an excellent imagination contained within my mind's eye.    I was quite surprised that Wood's book, Twilight, has met my standards of  intimate revelation.   There was a steamy night and some kisses too, but absolutely nothing explicit.   Go Sherryl Woods!

This book was actually a mystery romance, with both , Dana Miller and Rick Sanchez trying to ferret out who had slain the honorable Reverend Ken Miller.   By joining forces, they formed an unlikely alliance, challenged by mistrust of one another, and strengthened by a bulldog stubbornness to find those precious answers that could lead to truth, trust, and just maybe anther shot at love.

I enjoyed this book immensely.   The characters were strong and independent and with their conversations you could "hear" that spanish lingo.    The plot was well developed and although there were many bodies left for discovery,   it was very near the end when the murderers were revealed.  It was quite an interesting read.

I rated this read 5 winks!

Disclaimer:  I read for my pleasure.   I may receive ARC copies for review purposes, but I am not compensated for my reviews .  I like to read and I like to share my reviews.   I post my thoughts without prejudice or bias.  The words are mine and I write reviews based on my humble opinion.  I will admit, I seldom meet a book I don't like.  I borrowed this book from my mother!