It is release day!


I am pleased to announce that Cupid's Last stand has been released today and is now available at Amazon, B&N, iTunes, Kobo, and Createspace.    Go visit your favorite seller and getcha some! 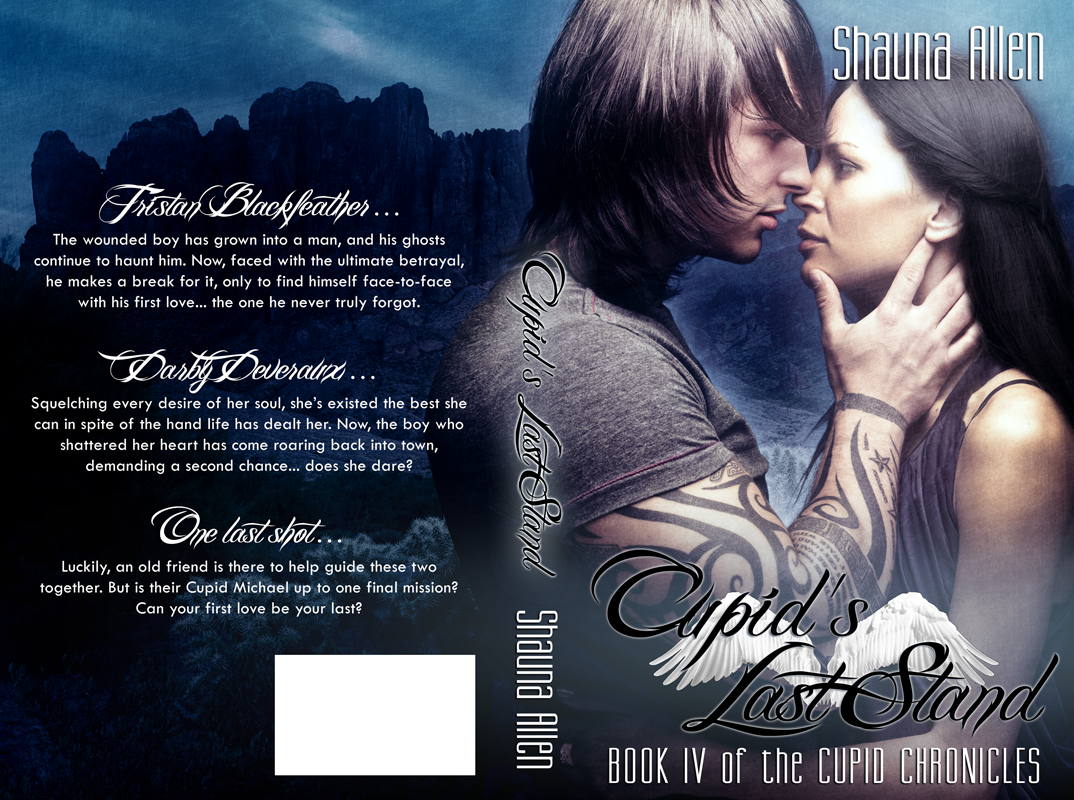 Cupid’s Last Stand blurb:
Tristan Blackfeather . . .
The wounded boy has grown into a man, and his ghosts continue to haunt him. Now, faced with the ultimate betrayal, he makes a break for it, only to find himself face-to-face with his first love . . . the one he never truly forgot.
Darby Deveraux . . .
Squelching every desire of her soul, she’s existed the best she can in spite of the hand life has dealt her. Now, the boy who shattered her heart has come roaring back into town, demanding a second chance . . . does she dare?
One last shot . . .


Luckily, an old friend is there to help guide these two together. But is their Cupid Michael up to one final mission? Can your first love be your last?


Excerpt from Cupid’s Last Stand by Shauna Allen:
Some stupid part of him wanted her to say she remembered every single thing about that summer. That she wanted it back. Wanted it all . . . wanted him. But he knew that could never be. He wasn’t the kind of man that women loved like that. He was not worthy; he was infinitely flawed—had known it since his dad left him, and most especially when Darby had first been thrown into his stratosphere as the ultimate tease. Mallory only served as an exclamation point. It was Darby. Had always been Darby.
Looking at her now, he knew it.
Suddenly, she dropped her head as something in her seemed to break. “Why, Tristan?”
“Why, what?” He placed the teabag on the counter.
She snapped her head up, her green eyes shimmering behind her glasses. “Why didn’t you write? Why did you just up and leave me that summer without a word? I mean, I know it was a long time ago and it shouldn’t matter now, but I just—”
He cupped her face and brought his lips to hers, shushing her words. He’d been waiting to do this since he first laid eyes on her in the Red Cross building . . . hell, maybe since he left her ten years ago.
She froze, her body rigid and tight as emotion thrummed between them. Then, as if a dam burst, she clutched at his shirt and yanked him closer as a mewling moan ripped from her throat and she allowed his tongue to slide in and twirl with hers. He tilted his head and deepened the kiss as far as he could, allowing every ounce of her to intoxicate him. He traced his fingertips down her throat, feeling the restless pounding of her pulse.
Ten years might as well have been ten seconds as it all came crashing down on them. He pressed her back against the countertop, fitting their pelvises together snugly, drawing a low groan from her as her nails raked down his back.
He sucked her tongue into his mouth, nibbled her lower lip. He’d eat her alive if he could. She was everything he needed to live in this moment. And she seemed to consume him in kind as her fingers moved greedily through his hair, holding him closer still.
A pop and a hiss from the coffeepot broke through the moment and she startled, drawing back to rest her head against his chest. “Tristan . . .”
He gripped her hips and held her close. “Darby. I did write. Even after your daddy told me not to. But you didn’t answer.”
She didn’t move for a moment and he wondered if she’d heard him. But she eventually peered up. “You wrote to me?”
He tapped his forehead against hers. “Yes. God. Like every day in the beginning. And I called too, but you were never home. I eventually gave up when you didn’t call or write back.” He pressed a kiss to her damp lips because he couldn’t help himself. “I told you I was crazy about you.”
She rested her cheek back to his chest. He didn’t say anything, not sure what else to say. He’d been a teenage kid. Sure, he’d promised her the moon, and sure, he’d been head over heels for her, but what did she expect? She hadn’t acknowledged one of his letters or calls. Life went on and heartbreak was a two-way street. He’d just sucked his up and bottled it away.
She rubbed her face up and down across his T-shirt as if inhaling his scent. “What did you mean about my daddy telling you not to write?”
“Really?”
“Yeah.” She drew back and met his eyes, her arms still linked around his waist.
He sighed. He hated to burst her bubble, he remembered how she worshipped her old man. He’d heard when he rolled into town that he’d died last year, and now Darby was running the company. Somehow, it felt wrong to talk smack about the dearly departed. But, the truth was the truth. “No big deal, Darby. After he found us together that night in your room, he pulled me aside and told me I was obviously not the kind of boy who was any good for his little girl, and if I knew what was good for me . . . well, he basically let me know that I was never to communicate with you again.”
She remained motionless, processing this. “He did?”
“Yeah.”
Her hand flew to her lips. “Oh, God.” Tears filled her eyes. “And all this time I was crushed. I thought . . . I blamed you. Thought you walked away and forgot me.”
He yanked her closer and pressed a kiss to the crown of her head. “I never forgot you, Darby. Not for one second.”
From My Perspective:

Oh how I have loved this series!!!   Regretfully, Cupid's Last Stand  is to be the final installment.   I guess it is true, all good things must come to an end.   Who said that?  If I knew, I would challenge a duel!

Seriously, this last installment was as sweet as the previous books and involved Tristan who we met as a teen in The Halo Efferct, (Book Two).     Now Tristan has grown into a man and he still thinks of himself as broken, and very unworthy.   I have read about so many women with low self esteem and how damaging it is to their hearts and souls, but I never gave a man with low self esteem much thought.  What incredible insight.

Cupid's Last Stand was the story of Tristan Blackfeather's and Darby Devereaux's past and present love story.   It all began when they were sixteen and now, they have been rung in for round two.   And Michael, the angel, and head of God's Love Detail was back to stack the deck with love for the two of them.  He had taken on a new physical body and was a little different than he had appeared previously.   But he was still Michael through and through.

As always, with Shauna's writing, the story was tender, inciteful, heartwarming and gave the reader a warm and fuzzy feeling.  It was delightful to see so many characters revisited throughout this last book...to catch up on their stories as well.   The characters were real and the story hugged your heart and welcomed you in to share it.

I gave this a 5 wink rating.    I so loved this series, The Cupid Chronicles.  I hate to see it concluded!

Shauna grew up an only child with two open and loving parents in Central Texas. She’s married to her high school sweetheart and is the mother to three awesome teenagers, including one she’s about to send off to the Air Force. She is the award-winning author of the Cupid Chronicles series, including Charlie’s Angel and Cupid’s Last Stand. Shauna also writes emotional Contemporary YA novels as SC Montgomery, works as a freelance editor, and is personal assistant to two NYT Bestselling authors. She loves all things sexy, sassy, and Gerard Butler.
Join Shauna Allen's Facebook party on June 24th to celebrate the release day of Cupid's Last Stand!
Join the party here!


Link is: https://www.facebook.com/events/764085243611625
Shauna would love for you to visit her at her website and blog at: www.shaunaallen.com
Facebook: http://www.facebook.com/shauna.allen.12
Twitter: http://tiny.cc/s0dlmw
Goodreads: http://www.goodreads.com/author/show/6916632.Shauna_Allen
Pinterest: http://pinterest.com/shaunaallen7/
You can also sign up for all the latest Shauna Allen news with her Angel Kisses Newsletter here! http://eepurl.com/D_RcP
And please learn more about her YA alter-ego at: www.scmontgomery.com
***
Praise for Shauna Allen’s Cupid Chronicles:
Tattoos, cupids, and bad boys: Shauna Allen delivers one heck of a read. Fresh, sassy, and witty—she brings a new voice to romance that readers are gonna love!