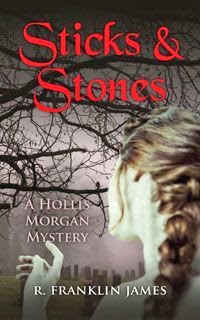 Sometimes reading a book is like catching up with a good friend.   And so it was when I read the second in the Hollis Morgan mystery series.   As I read, I was drawn in to all that was affecting my friend Hollis.   She needed to vent and I was caught up in her whirlwind life!

Grab a coffee, and I'll tell you all about it.

“Sticks and Stones can break my bones ….” Despite what the old children’s rhyme says, words can cause grievous harm. A lesson ex-con Hollis Morgan, a casualty of her deceased ex-husband’s white collar crimes, knows all too well. Now that she has received an official pardon, she is free to pursue her dreams of moving up in the world from paralegal to attorney.While awaiting the results of the bar exam, she hopes to clear the name of a friend accused of libel by philanthropist Dorian Fields, a man whose charitable giving looks a lot like money-laundering. Only problem: the evidence has disappeared and her friend Catherine is found dead. Although initially thought a suicide, Hollis' friend was murdered. Catherine was writing an article about Fields for a tabloid. Hollis and attorney Mark Haddan convince the magazine to let them carry on with the libel defense, but they have fewer than 60 days to prove Catherine’s exposé was well-founded. In the meantime Hollis has other distractions; she is also helping to settle the estate of Margaret Koch, a rich client of the law firm whose impetuous actions as revealed in her letters still embitter the lives of those she left behind. And then there are the two men vying for her attention—one a police detective, the other a private eye. Normally Hollis trusts her built-in lie detector, but in this case, too many people are lying for too many reasons. One of them is not only a liar, but a killer. Sticks & Stones is Book Two of the Hollis Morgan Mystery Series, which began with The Fallen Angels Book Club.

Hollis Morgan had been knocked around by life a time or two, but she'd made a life for herself inspite of the cards she was dealt.    She served time for a crime her husband committed, (Insurance fraud).   His scheming and conniving ways eventually caught up with him...now he is deceased.

Hollis had served "his" time, and taken the California bar exam.    She had always wanted to be a probate lawyer and leave her job as paralegal behind.   She was like a dog with a bone when it came to researching things and got herself into more trouble...seemed like someone was always dying around her and she'd often been considered a person of interest if not the suspect.   She'd also been a little too close to the police investigations and warned against withholding evidence.

In this installment a close friend came to Hollis for help and was murdered before the next dawn.  Hollis was then thrown into a plight to clear her friend's name and reputation.   And a wonderful mystery ensued, well actually two.    And there were a couple of love interests for Hollis, one of which would be nice to have on her side.

R Franklin James has a great writing style.   She plots a great story and writes it out like it is magic and it flows quite nicely.    The reader is easily  drawn in to the world of Hollis and her coherts.   There are always twists and turns and some surprising results which are quite satisfying for the mystery lover.

I rated this book a 5 Wink read...quite enjoyable!