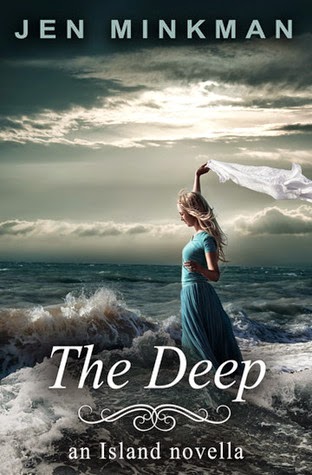 I have been so honored and privileged to read and review the previous two books in Jen Minkman's  Island trilogy.  I was ecstatic to read the third in the series, The Deep.

‘The world is never-ending.
I never realized just how much space there is – how far and wide the water around our island stretches out. Somewhere in the back of my mind, I may have believed that a second Wall ran around Tresco, containing the infinite waters so we wouldn’t all wash over the edge and plummet down into the depths.’
Leia and Walt are on their way to the Other Side, where the legendary land of Cornwall awaits them. Tony, their new friend, has told them that all wars of the past have been forgotten and the citizens of Bodmin and Dartmoor live in peace. People adhere to the tenets of an old religion that preaches forgiveness and non-violence.
However, Walt and Leia soon discover that even a peace-loving, ideal society like this one may have its flaws. While on a forbidden trip to Exeter, the old city of their ancestors, the two Islanders discover more about the new world than they ever bargained for.
Secrets run dark and passions run deep in this thrilling conclusion to the Island novella series.

This third in the series, was told from Leia's and Alisa's perspective, alternately.  Both of these women were strong characters and well written.    Both had been crucial characters in the previous two books.  The story line was very unique in this last installment with redemptive stories of Ben and Saul presented in a most endearing manner.   Leia and Walt melded their relationship with their need for one another's support and protection as they observed and explored in the world across the seas.  And although their new found friend, Tony provided a tour of his homeland, there were things, he omitted and had hoped they would not be witness too.

Minkman brought  closure to the inahbitants of Tresco  and Hope Harbour through a confrontation of evil from across the seas.   The people of the island were forced to work together to protect themselves and then relocate to a new homeland to further ensure their safety.   It would be a new start, based on truth and common sense.   The young people would be shaping a new world for their children and the children of the future.   These books were quite thought provoking and enjoyable fiction.

I rated this book 5 Winks!