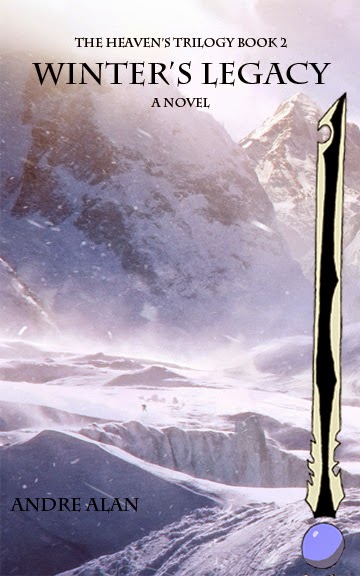 Thame Elliot is the Legacy of Winter and with the magically enchanted Tundra Sword at his side, he must stop his evil twin, Miles Xavier from covering the world in darkness. Thame lost his mother before he was born and lost his father to betrayal at the age of ten. Now, they get the chance to meet each other and become a family.
The Orcs and Dark Elves have formed an alliance and with the help of the other evil races on planet Threa like the Goblins, Trolls and Frost Giants plan to end the humans, Elves, Gnomes and Dwarves once and for all.
Despite all of these threats, Thame must also protect his new family on Threa where his wife and baby girl are under the constant threat of death because of their bloodline and status. Thame must not only try to keep his growing family safe but also try to save the world from the coming war.

Andre Alan is from Hartford, CT and attended college in New Haven, CT. After graduating with a degree in International Business and a brief career as an IT Data Analyst, Andre Alan decided to follow his lifelong passion of creating fiction entertainment. With a small amount of artistic talent, he has released a comic book which is available only at the EVapor ENT official website. He has published a moderately successful Epic Fantasy novel titled Winter's Legacy which is currently available online at Amazon and Barnes & Noble. In his free time, Andre Alan is an avid video gamer (when time permits) and an lover of ramen noodles. Andre Alan is a sports fanatic and a lifelong student of business and entertainment.

Although this is a genre not at the top of my reading preferences, I enjoyed reading the story and following the adventures of Thame and his pre-ordained life and death.   The character of Thame is probably the best developed character in the book but I enjoyed meeting his wife and newborn daughter as well as his wife's parents and brother, Cyrus.   I had a little trouble identifying who Thame's real enemies were, since he seemed to be friends with those who were not so loyal to him.   But again, Thame was considered Winter's Legacy and had been foretold of in prophecy.   He was a decent man and sought to do right for his society.  He was also a learned man and well suited to leadership, although he was also hot headed and lacking the wisdom of the mature.

His adventures after his death as he tried to return to the land of the living and protect his wife and his daughter, was heroic and full of wild adventure.   His journey meant traveling through the nine levels of hell and making conquest after conquest in order to succeed in his mission.   Many befriended Thame and many tried to stop him and send his soul to hell forever.

I rated this fantasy tale a 3.5 rating and will recommend that my grandsons consider reading it.    I would love to know their take on this writing by Andre Alan.