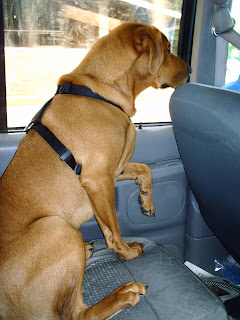 I am an animal lover! Horses are my favorite, then dogs and cats. Big or small, I love them all!
Where we live we have a creek nearby and lots of trees and brush, but we are still within the city. We have a crab apple tree that has a wierd shape to it, but for all I know, it is the shape of any crab apple tree. If you lived in the country, it is not unusual to see wild life peppering the hills or walking through your front yard. Living in town, though it is like a miracle of nature to see wildlife up close and personal. Several weeks into November and then December, we had seen deer near the crab apple tree. One night three of them darted across the street for the woods as we drove into the parking space. Once we saw a seven or eight point buck nibbling on the fruits of our tree. Usually they arrive in pairs or a three some....some are tall does and some are younger shorter critters and I am thrilled to see them everytime they gather under our tree. I have even toyed with the thought of putting a salt lick out for them. One night as my husband was letting the dogs out for a "break", our 75 lb lab-chow mix bolted from the house in chase of a deer, almost knocking DH off his feet. Needless to say it was one of the worst nights of the year weatherwise, it was raining frozen pellety sleet balls, and although DH tried to follow and capture the escaped Max, it was not to be. We called and called for him and we were up half the night, hoping he would return. Needless to say, he did not return. We were heartsick to say the least...it felt like we really had lost a member of the family! We wondered if he were hurt by the deer or dead...Would he survive the weather, he's big, but he is spoiled. Would we ever know what happened to him......that was the worst, would we ever know. This big old dog sleeps with me every night and he likes his comfort.......We called the ARL and asked them to watch for him. We even alerted the "dogcatcher". No one had any reports of seeing him. Two days later, my husband answered scratching and scraping at the front door and there was our dear sweet Max!! He jumped into bed shivering and slept for several hours. I was so thankful that God allowed our Max to survive and return to us; he answered my prayers. Now I know a dog is not the same as if something happened to a person, but the piece of your heart that they own is just as real and just as painful. His return home with frostbit paws was the best Merry Christmas we could have had! I no longer entertain the thought of putting a salt lick out for the deer...if I do, it will be on the other side of town. This fruit stand is closed for the season. Of course if a doe brings her fawn here in the spring, I will be all eyes, again. Nothing lasts forever, does it?
Posted by Unknown at 4:43 PM