There's a Moush in the Housh 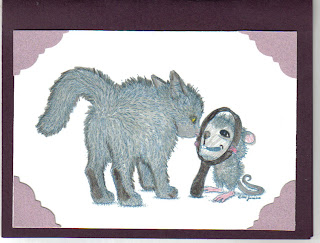 Yes, some could say I have spent more time with Noah than with Storm and Kane. But then considering we keep him during non school hours , is that really any wonder? The title of today's entry is courtesy of Noah, who was relaying the above information to anyone and everyone who would listen when they experienced their first uninvited house guests. My kids grew up in apartments, duplexes, finally a house and although we didn't see any mice while we lived there, we did have them. Our cats Baby, Charlie and Itty Bit liked one room in particular....my craft room and so I knew there had to be something of interest in there. We didn't find his dried up little carcass until we began the move out.

Although my kids did not experience living with a mouse first hand, I had great knowledge of the little critters. In the fifties, farm houses were known to be infested with them. And as luck would have it, I think we rented every old farm house that was ever plagued with the vermin! Seriously, I love animals and even a mouse has it's place, but it is not in my turf. Out in the barn, ok. In the garage, sure thing. In my room, in my bed, NO WAY!

I was probably seven, maybe eight, when I had my first up close and personal encounter with a moush. We lived in a two bedroom country house which sat on the ground, with no real foundation beneath it. There were 7 of us--mom and dad, the four boys and me.
I know we had lived in previous farm houses where mice were prevalent. You could always hear the scratching in the walls as they scurried from here to there and back again. Mom always said if you saw one, there were a hundred more! I know at one farm house they used to run across the bed at night....they knew no shame! And apparently no fear! Anyway, My Grandma was always trying to help my mom with things....lighten her load with the five of us kids and living in the country....not my mom's forte' at all. So that particular wintry day when they were trying to accomplish great amounts of work, they bundled the five of us up and sent us out side to play in the snow. I returned to the house complaining that there was a bug in my clothing and it was scratching me. I was ushered back outside and told to play in the snow. Roll on the ground and if there is a bug, you will smoosh it. Again I returned to the house. There aren't any bugs in the winter, now get outside and stay there. Grandma was very insistent that I not return again, so I tried to handle this wicked grasshopper myself! I flattened myself onto the snow and began the rolling to and fro process. Got to my feet and I could still feel his craggly feet scratching my skin. I finally stormed into the house and told them nothing was working and I needed help. As I was shaken out of my winter clothes, out jumped a dizzy little mouse who had ventured into dangerous territory. Only then was I believed, but I had erred in the credentials of the scratching scathing little varmit. Of course they were all sorry then! Too little too late.

We moved into another farmhouse when I was a Senior in highschool. It was a large stucco farmhouse, four bedrooms, beautiful woodwork and just as mouse filled as the little crowded house. I usually washed my own laundry and one day, I washed a load where a suicidal moush had hidden himself deep into the clothing. I didn't see him when I removed the load of laundry, but there was a peculiar smell when I dried the clothes. And then I saw his pesky little corpse! Do you know how long it takes to wash that smell out of your clothes? I thought we would surely run the well dry before I got rid of that smell!

But the best moush story happened to my mom, who was terrified of the fast moving creatures!
She was changing the bedding in the boys rooms and unknowingly stepped on a deceased rodent lurking under the edge of their bed. He had apparently been dead long enough to bloat, as dead bodies do on occasion. POP! and EEEW!! Oh my did she scream! And oh my how she did a jig!..... Oh my how he stunk to high heaven! It's a miracle she didn't land on him again. And how we all laughed at her dismay!
Love ya mom! You're my favorite!

So tell me, what gives with the attraction to House Mouse stamps? Obviously the designers never had to rewash their luandry, shake them from their clothes or cast them out of their beds at night, or they would be depicted as MONSTER MICE, rather than adorables. The card pictured used House Mouse stamp "Scaredy Cat" and is colored with colored pencils, my favorite medium, ( depends entirely on the day) of course.

May your days always be moush free!
Posted by Unknown at 4:48 PM

I love the stories, But you left out acouple out. Maxie the mouser, And Baby's gift.

I was mortified that Noah told that story to anyone that listened and now you're posting it for the world to see?!? HELLO!?!

Any how, I too loved the stories. Grandma's was the best, of course.