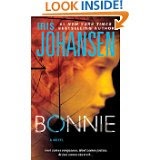 Part 3 of the Eve, Quinn, and Bonnie Trilogy, was a fitting conclusion. I could not put it down and pulled an all night reading to finish it. The story begins with Eve and Bonnie Duncan on the night before Bonnie was kidnapped. Such great love there was between them. Catherine’s Boss, Venable, was pressured by his boss to get Catherine to South America for a project and Catherine was knee deep in solving Bonnie’s murder. She and Gallo had who they thought was the murderer under wraps on the bayous of Louisianna, but he was not safe and was murdered before he could tell them who Bonnie’s killer really was. While searching the Bayou for Jacob’s killer, Catherine actually glimpsed his face, was almost killed by the same man and Eve sketched the face which was very familiar to her…Gallo’s kind uncle, Ted Danner. Danner escaped and all four, Eve, Joe, Catherine and Gallo all continued the search for the mentally ill Danner. Tracking him down was a major part of the story, leading them to a doctor who dropped off the face of the planet, a priest that Danner had trusted and cared for years, and a boy named Ben who was special as Bonnie had been. Bonnie had come to Ben, Danner, Joe, Gallo, Eve and finally to Catherine as well, ( a tad bit on the bizarre), but not a scary prospect….except for Danner who wanted her to quit following him. We do find out how Bonnie died and who was responsible, but I’ll not spoil that in case you might want to read it. The stage is set for more Eve Duncan stories and it remains to be seen whether Bonnie will appear to Eve in future installments. Excellent plot and twists along the way! I was as surprised as Eve Duncan at how the story played out.