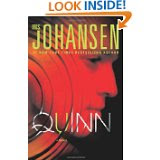 FBI agent, Joe Quinn, first meets Eve Duncan two weeks after the disappearance of her 7 year old daughter, Bonnie. He is not accustomed to becoming involved with a victim’s family, but something is very different with this particular case. He is inexplicably drawn to Eve and has the basest of needs to protect Eve and soothe her pain, help her to heal and to accept the probable death of her baby girl. This was the first part of the book. As obsessed as Eve is with finding Bonnie and her killer and bringing Bonnie home, Quinn is obsessed with protecting Eve.

The latter part of the book picks up where EVE left off. Joe had been stabbed by Paul Black before Black's demise and he is now recuperating in the hospital from a near death experience, where Bonnie led him back to Eve and life. She told him she loved him and that the end was near and Eve would need his help to get through it. This experience drew Eve and Joe closer than they had ever been.

Meanwhile Catherine Ling tracks Gallo in the mountains around his cabin. She is convinced he did not kill his daughter and the search is on for the real killer. Joe and Eve eventually arrive to assist in the search, another accomplice of Queen is killed and we are left to begin BONNIE. Can you say cliffhanger and twist? I’m so glad I waited til I could read one right after the other…..so disturbing.

This is a series I just can't put down...I'm off to start the third and final book of the trilogy....I hope whatever you are reading is equally satisfying! Till next time :)