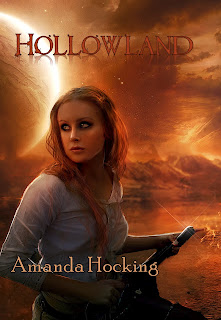 In my explorations of young adult literature I came across the first in a series from a newer author, Amanda Hocking.    She was a very good author and was able to grab my attention from the start of this book.   This is a story about surviving American life post zombie infestation.   A virus had broken out and those infested turned into Zombies.  They attacked and ate the flesh of normal human beings. This bite would infect the person and transform them into more zombies.   Our heroine, Remy King, witnessed the demise of her parents at the hands of Zombies and so began her quest to protect her eight year old brother, Max.   During their escape from the Zombies, Max was bitten and Remy suspected he was immune as there were no symptoms during the days following.   When they were rescued by the government forces, they were taken to a quarantine established on the Wyoming border.   She and Max were separated under the guise that Max was ill and needed medical treatment.   When the zombies actually attacked the quarantine,  Max was evacuated to a different quarantine.   Remy and a couple of her friends escaped on their own, just before the quarantine was burned to the ground and killed any of the remaining survivors.    From then on, Remy was in a race against time to find her brother and protect him from the medical researchers using his blood to seek a cure.   Remy would have done anything to protect Max.   The action was fast paced, characters well developed, and despite the fact that the antagonists were Zombies, the story was entertaining and enjoyable.   Although I am not partial to Zombies or vampires, I will probably read the books in this series.   I would like to see how it all shakes out.

The Dark Lake by Anthea Carson

The Light Between Oceans by ML Stedman

"From your parents you learn love and laughter and how to put one foot before the other. But when books are opened you discover that you have wings."
Helen Hayes

Sounds exciting! I too am not partial to zombies, but maybe I'll have to check it out!

I agree, but she does a good job of storytelling! Thanks for your comment.

Rather you than me re zombies! I like to sleep at night... ;)

I have this book on my TBR pile, thanks for the great review.

Sounds good. I do have a thing for zombie books lately.

thanks for the comments!