Children of the Revolution by Peter Robinson--A Review and Giveaway 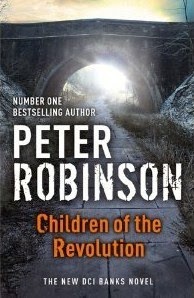 Last week I had my almost three year old granddaughter with me for an entire week.  If you are reading this, I have survived.  Two of my grandsons will be with us this week, but they are teenager and a tween and can basically entertain themselves.   They are pretty well self sufficient, except that one of them has discovered how jumpy I am and so now he loves to scare me!  It just delights his heart if he can scare the wits out of me!   Reminds me so much of my grandpa and how he loved to scare me as well!   His speech was impaired due to a stroke, but his laughter wasn't affected.

Today's review is of Peter Robinson's, Children of the Revolution.   Take a look at the synopsis:

A disgraced college lecturer is found murdered with £5,000 in his pocket on a disused railway line near his home. Since being dismissed from his job for sexual misconduct four years previously, he has been living a poverty-stricken and hermit-like existence in this isolated spot.
The suspects range from several individuals at the college where he used to teach to a woman who knew the victim back in the early '70s at Essex University, then a hotbed of political activism. When Banks receives a warning to step away from the case, he realises there is much more to the mystery than meets the eye - for there are plenty more skeletons to come out of the closet . .

Skeletons in the closet indeed!   This was an excellent police procedural with lots of twists and turns.
Children of the Revolution refers to that of the sixties and early seventies and there is much reference to bands and their music and the eclectic tastes of Inspector Alan Banks.    Yes, those were the good ole days.   No witnesses, few clues at all and an introverted dead professor, sends Inspector Banks and his team on a wild goose chase in the present and forty years ago as well.

Robinson had a well plotted mystery and supported his solution with well developed characters who exuded intricate personality defects.   Internal strife and rivalry also paved the way of the investigation.  This was one of the more interesting police procedurals  I've read recently and I rate it a 4 Wink read.

Giveaway:
Lucky reader giveaway...just head out to the rafflecopter giveaway at the link below.   Here's hoping you win!