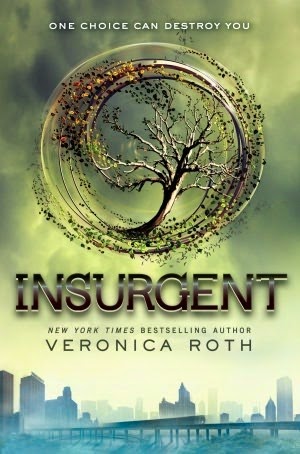 
One choice can transform you—or it can destroy you. But every choice has consequences, and as unrest surges in the factions all around her, Tris Prior must continue trying to save those she loves—and herself—while grappling with haunting questions of grief and forgiveness, identity and loyalty, politics and love.
Tris's initiation day should have been marked by celebration and victory with her chosen faction; instead, the day ended with unspeakable horrors. War now looms as conflict between the factions and their ideologies grows. And in times of war, sides must be chosen, secrets will emerge, and choices will become even more irrevocable—and even more powerful. Transformed by her own decisions but also by haunting grief and guilt, radical new discoveries, and shifting relationships, Tris must fully embrace her Divergence, even if she does not know what she may lose by doing so.

This second book in the series, lacked the lustre that Divergent had, but it was still interesting and quite necessary in the building of characters and story plot line.   Tris who started out as an innocent 16 year old, had left the abnegation factor, for the Dauntless faction.   In book one, she survived her initiation into the Dauntless, made choices regarding friends and foes within her faction and fought alongside the divergent to stop the annihilation of the abnegation faction  by the Erudites.   In book two, she is saddled with guilt and grief at the loss of her parents and her friend Will.    This baggage slows her
down  as the factions fall apart, a deadly secret is revealed and truth is sought and shared with all.

I love the twists and turns Roth uses to reveal the political struggle and conflict within the factions.  I enjoyed the challenges and choices that each person needed to deal with.  Her writing style is so easy to read and the reader is as involved as any of the characters on the page.   I rated this read a 4 Wink read only because it wasn't quite as intense as the first in the series was, not quite as personal.

I will be reviewing Allegiant soon.   So stay tuned!