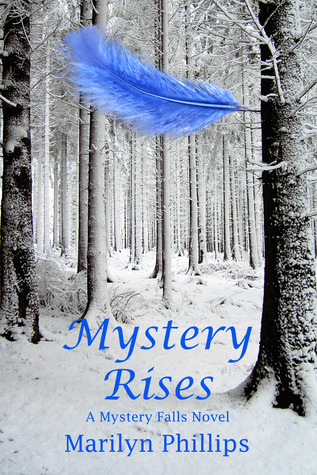 You know you have read a really good book when you sigh at the ending and spend days thinking about the characters and their story.  I fell in love with Shadow and Samantha long ago when I first read book one in the Mystery Falls saga.

After spending months apart due to an enforced separation, Samantha and Shadow are finally reunited. However, it is a reunion which may be short lived. As more secrets of the past are revealed, Samantha not only discovers her true heritage, but also how heavily intertwined it is with Shadow’s. Suddenly finding themselves on opposing sides of a feud which started long before either one of them was born, they struggle to remain together in a world which seems determined to keep them apart.

Neither one of them wants to enter the conflict started by their forefathers, but unfortunately, there may not be a choice. With Samantha’s true identity now known in the world of the angels, she has become a pawn in a deadly game of revenge. Desperate to hold on to the one person who truly matters to him, Shadow must find a way to protect Samantha... or risk losing her forever.

I have rated this a 5 Wink read.

Mystery Rises by Marilyn Phillips rates right up their near the top of the list of my all-time favorite reads.  It is a deliciously written love story between Shadow, a now fallen angel, and Samantha, a high school student whose birthright is that of angel, well part angel anyway.

Phillips has invented such believable characters, so strongly attracted to one another, with an entourage of ecclectic friends and family.   Some personalities are strong and truly loyal.   Some are totally annoying, but there is always room for growth and acceptable change.   That is not the case with Sam's grandfather Aric,  Shadow's former girlfriend, Kira and  a plotting fallen angel, named Raynor.

The love story is sort of a Romeo and Juliet, or Hatfield and McCoy, troubled relationship.  They are hindered by an age old family war which the ancestors would prefer resulted in the elimination of the relationship between Shadow and Samantha.  Loads of passion and desire fill the pages as well as fear for the future.  To what lengths will the warring angels go to gain the upper hand in their endeavors?

I love angel stories and I love the romance between angels and their humans.   I have totally been intrigued by Phillips compelling story and I will hate to see it ever end.  Her writing is easy to read and follow.  And the story is endearingly sweet and sexy.   What woman doesn't long for a protector like Shadow?   I'd spend some serious time with the guy!

Book three should be out sometime this fall, (maybe November) and it is called Mystery Eternal.  It will be the last in this excellent series!   I for one, can not wait!!

I received a copy of this book from the author or their representative in exchange for an honest review.
Posted by Unknown at 12:00 AM

I still haven't read the first one. I tried to get it on my Kindle but for some reason you couldn't buy it from Amazon. Then I went to B&N but they didn't have in stock so I gave up.

Thank you Beth for such a beautiful review. Your kind words and support are greatly appreciated.

Oh Beth, do try again because this series is just down right awesome and well worth the trouble!!!