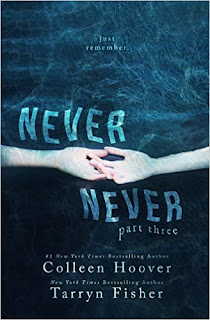 Once upon a time, fairytales were told and the main characters of the fairy tales, lived happily ever after.   Once upon a time, I fell in love with the work of Colleen Hoover and I have read a lot of her books, but not all.....she writes faster than I can read and I can not keep up with all of it.     Then once upon a time, Colleen wrote a book with Tarryn Fisher and it was called Never Never.

Never Never became a trilogy.   The first book was intriguing and left us wondering in suspense.    The second book was more of the same.     Every 48 hours Silas and Charlie, (Charlize), loose their memories of themselves and each other and every thing they know about their world.    Sort of reminiscent of the Bill Murray movie, Groundhoig Day, which I hated.

Now the third book has been released and it is time for me to review it after having read through it.

New York Times bestselling authors Colleen Hoover and Tarryn Fisher are back with the much-anticipated final installment in the Never Never novella series.
Together, Silas Nash and Charlize Wynwood must look deeper into the past to find out who they were and who they want to be. With time ticking down, the couple are in a race to find the answers they need before they lose everything. Can they regain what they once had? And will it restore who they once were?

Book one was 159 pages, Book two was 158 pages and the third and final installment was 92 pages long.   To me, this should have been released as one full length novel, rather than as a trilogy.     I hate suspense to be drawn out in such a manner, waiting for part two which felt a bit repetitive of book one and then waiting for the conclusion in part three which was only a short story ending.

I didn't know what to expect for  an ending in this series, but I knew I had to finish it.   Seriously, who can leave it hanging?    Certainly not moi!   I am glad I was able to finish the story.  It was more or less a happily ever after ending and the main characters did grow to know and understand who they were previously and made the choice to be better people in the present and future.

Was it quirky?   Yes, it had that quirky Colleen Hoover element.   Was it enjoyable?  Yes      Was there a twist that surprised me?    yep....especially toward the end.    My preference however, is for Colleen to stick to her own authoring of books with the quirks and surprises and enjoyment that comes from her own well of creativity.

I rated this a 3 wink read.

Disclaimer:  I read for my pleasure.   I may receive ARC copies for review purposes, but I am not compensated for my reviews .  I like to read and I like to share my reviews.   I post my thoughts without prejudice or bias.  The words are mine and I write reviews based on my humble opinion.  I will admit, I seldom meet a book I don't like.  I purchased a copy of this book for my personal kindle collection.
Posted by Unknown at 12:00 AM