Miss Beth and Her Posse' 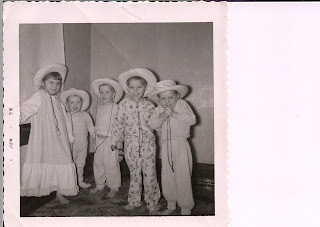 When my youngest brother passed away a year ago in December, we of course went through all the old pictures and several of the old black and whites, (none quite as cute as this photo), showed me next to the youngest brother and then the rest of the boys. We were a handful to say the least. It is interesting to note that although as oldest and youngest of the brood, we were the two most at odds as teens and adults. Not that he didn't rightly resent me. My mind was always turning and usually the four boys were my followers, and we were always in trouble. One of my efforts was to try and train a sweet little pony how to be ridden......Trust me at 12 or 13 I was no expert with horses. The only example I'd ever known was the man we bought the pony's mama from and he was a rambunctious and mean spirited man. Add his example to my own teen age meanness and determination that the pony was going to do what I wanted her to or else, it was little wonder that she reared in her rebellion, toppled backwards and shoved the saddle horn into my youngest brother's eye. None of my brothers ever forgave me that incident, or for the time we all suffered spankings because none would confess to the offense at hand. Shortly after our whippings, mind you, my guilty conscious got the better of me and I confessed.
Once, I wanted to skip school so bad that I talked my brothers into helping me walk the horses through the field so we could say they had gotten out and we just had to catch them......oh those naughty horses!! Of course none of the kids on the school bus believed us that the horses were free and one of the posse ruined his perfect attendance record (which he always got a school certificate until that year). Oops another black mark against me. So I guess when we get together at Christmas time and tell tales, is it any wonder I am the subject of many of these nasty memories? Did I bring it on myself or what?
Mom went to town to work when I was 8, Dad was always in the field and that left me and the four boys. And I was the boss, (or so I thought I had been appointed/annointed). During those growing up years, I slammed a kitchen door shut while trying to get the boys out to chore. The top of the door had a glass window and when the door stopped, guess whose arm didn't? I thought it was the coolest thing to see the inside of my arm and how the blood pumped through the veins.
And did you know that if you have fat because you are fat, it is snow white inside your body? Yes, I was over weight, but wait, that's another blog! Then there was that pony incident, and the incident where a hammer was dropped on my youngest brother's head.....yes, a miracle that he survived to be an adult. Well, Mom had enough of the phone calls and bad news and when I was thirteen, she hired a babysitter! Who wouldn't want to babysit the five darlings pictured above? We stole my dad's cigarettes so she could teach us how to smoke, the posse tied her to a chair one afternoon while I was out riding and refused to let her loose......and we learned a lot of fun words from her too. She didn't come back the next year. I really liked her.
Posted by Unknown at 7:12 PM