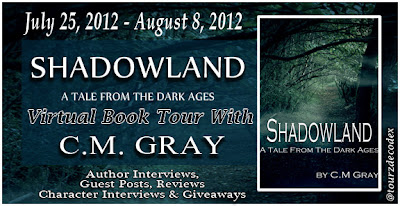 Find Author and the book Here:-

Born in Essex, England in 1963 I have since been lucky enough to live and travel in many countries around the world. In fact I have lived more time outside of England than I have living there! Home for me now is just outside of Barcelona, Spain where I live in a house in the middle of the forest with my Dutch born wife and two children, Dylan and Yasmin.

My writing is mostly fantasy and many of the experiences I have had in Asia, Africa and the middle east come to life in my writing. The Flight of the Griffin follows the adventures of a group of young orphans as they battle demons and bandits on a magical quest to stop the world tipping into Chaos. Shadowland blends fantasy with history as an old story teller takes his audience back to Britain's dark ages.

We grow up with the Legend of King Arthur ... But where did he come from? Who was Merlin? What part did the Druids play in bringing Arthur to his round table? Shadowland is the story that came before, when Britain was in its darkest age. It tells of the start of the Pendragon line and the birth of a legend.


`I have lived more years than I can remember, probably more than the sum of all your years combined. Kings have called me friend and brigands have sworn to burn the flesh from my bones even if they have to search all seven halls of the shadowland to find me.'

On the night of midwinter's eve, a storyteller takes his listeners back to the Dark ages and a tale from his youth.

Usher Vance and Calvador Craen return to their village to find it being attacked by a Saxon and Pict war party. With the help of an aging bowman they pursue the warriors and manage to free Cal's sister. Now being hunted they escape into the forest and follow the path a druid sets them on find welcome and a few surprises with a rising army of Britons set upon reclaiming their land from the Saxon invaders.

With the death of Ambrosius at Mount Badon a new king must rise to meet the challenge and return the land to the tribes.

I enjoyed this book mostly because it was outside the normal parameters of what I read and that was in itself refreshing.  It was told by a very aged Usher Vance and all through the book, I felt as if I was one of the many gathered around Usher and the inn's huge fireplace listening to his exaggerated tale of action and adventure!!   The Characters were very well developed and  all throughout, I felt their emotions just as they had.  Those emotions ran from shock, fear, outrage, cold, nausea, pain, remorse, more pain and more fear!  But when we're talking a time  well past, when history was being made and countries were up for grabs, what other emotions could these soldiers and patriots have shared.....except victory for their own survival and that of their country!

The pages of this book revealed so much action and so much adventure, it really was hard to put down. And I loved how it tied the history of King Arthur's predecessors in to such a nice little package!   If you love action/adventure, legends and lore, grab yourself an ale and join the crowd gathered around the fireplace and the old storyteller! You just might learn a thing or two.

I rate this book 4 winks out of 5.
Tour Schedule:-for additional reviews and information regarding Shadowland