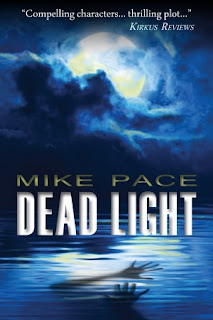 Top of the Morning Peeps!    This morning I am so pleased to present an interview with the talented author of Dead Light, author Mike Pace!   I can tell you ahead of time, he is very ornery as a couple  of his responses will soon reveal.   First the synopsis of his book, Dead Light:

…a matter of light and death…
In the sleepy college town of Cumberton, MD, an old cemetery must be moved to make room for a new dormitory, and an ungodly Light, buried for centuries, escapes. A rash of gruesome student suicides rocks the town. Sheriff Estin Booker teams up with former Baltimore homicide detective Anna Tucci to investigate the deaths. What neither expects is to have all roads point to a 2000-year-old legend which, if true, could lead to the destruction of mankind.
The most frightening account of the power of evil breeching our world since The Exorcist, DEAD LIGHT will teach you the most improbable lesson you will ever learn:
FEAR THE LIGHT!


When did you know you were born to write?

Grade school. I much more enjoyed helping to write the Christmas play than performing in it. (Although my portrayal of the Chief Elf remains the gold standard for the role.)

Who influenced you in becoming the author you are today?
Every person with whom one comes in contact can influence the content of one’s writing. Characters are based on amalgams of people we meet throughout our lives. My parents were very influential. They met performing in a play at the Pittsburgh YWCA, and later traveled around the city putting on marionette shows for kids. Dad made the puppets and Mom provided the costumes. They wrote their own scripts and that’s probably where my inspiration came from.

What was your favorite book and author as a child?
Loved Grimm’s Fairy Tales and the Hardy Boys series. Probably why I read and write thrillers.

Who do you read now?
I try to read as many thriller and horror-thriller authors as I can and listing any, thereby excluding others, is unfair. So I will simply list by way of example, Doug Preston and Lincoln Childs, Daniel Silva, David Balducci, John Grisham, Jack Ketchum and, of course, Stephen King.

Do you read as much as you write?
More.

If you could meet any author of past or present, who would it be?
As a member of the International Thriller Writers Association, I’ve fortunately been able to meet many of my favorite contemporary thriller authors. With respect to past authors, probably Mark Twain because I can’t imagine a more interesting evening than listening to his stories over a few adult beverages.

What would you ask them?
Again, with respect to improving my craft, I’ve had the opportunity to chat with great thriller authors through the ITW. I’d probably ask Twain about the delicate subject of race and how his own views, seen in the light of his time, infused his writing.

What made you select the thriller genre?
Easy. I write the kinds of books I’d like to read. If I tried to write a romance, my attempts at a steamy love scene would cause my wife to laugh so hard she might hurt herself.

How did you conceive the idea for Dead Light?
The story began as a screenplay entitled, The Flickering. The germ of the idea for the screenplay came from my Hollywood manager and friend, Rob Kesler. Rob had read about Vicary's 1957 experiment with subconscious marketing through the flickering light of a movie projector. We thought there might be a story idea there. Originally, the story centered wholly on a group of students and a sinister theater owner who kept his hypnotized victims hidden in a secret room below the theater. (Still a good idea, by the way.) Two cops were minor characters. As the story evolved, the roles of the cops grew and we fell in love with the Estin and Tucci. The focus on the flickering projector raised the question: what would happen if light from lots of everyday sources became a weapon of death? And I was off to the races. Like real germs, idea germs are all around us, ripe for the picking.

What advice would you share with a would be writer?
No matter how good you think your manuscript is, show it to others before you submit it anywhere. And that means people other than your family. The cost of a professional content and line edit is money well spent.

Who is the first person you share the written word with?
My patient and immensely talented wife, Anne. She’s learned to be brutally honest. (Sometimes too brutal.)

Can you tell us a little about your current WIP?
Called Red Island. A grad student is one of a group of tourists on a Caribbean cruise who are lured to a private island where they’re forced to participate in deadly games of death to entertain international captains of crime. Think Hunger Games meets Saw.

Favorite drink?
Adult: Kettle One on the rocks with a twist of lemon.  Non-adult: Club soda with a splash of Cranberry juice.

What is your ultimate goal with your writing(s)?
To make people late for work in the morning because they were up all night reading my book.

Thank you for participating with my interview.   I am sure I have helped fulfill your goal with Dead Light.

I can not believe this thriller/horror story is a first novel out of Mike Pace...let me say awesome!!   This book is dead scary in my humble opinion and had me saying, what if this could really happen.  Oh my goodness, I wanted a come to Jesus meeting and wanted to bring the characters along with me!    Mike did an excellent job of character development.   The protagonist, Estin Booker, was a good ole boy, pretty well laid back and definitely in for the long haul when it came to being the Sheriff in Cumberton, MD... aka as Mayberry.  Anna Tucci, although a detective with anger issues out of Baltimore, vacations on demand by her boss in Cumberton and is immediately sucked into the investigation of a co-ed suicide, or is it murder?  Anna is as sarcastic as she is angry, but she rather enjoys her days in Mayberry, until both Booker and Tucci start to believe the unbelievable and come to grips with their own what if's.

Mike's humor comes through loud and clear in his storytelling and I found myself laughing at different times throughout.   The humor was almost a necessary reprieve from the dark horror of the story which had me rivoted.

Do you like a tense thriller?   Do you enjoy horror?    I think Mike Pace may be in line with some of the major names in horror/suspense  and yes, I'm giving Dead Light 5 winks!   I guarantee those eyes will not be winking shut through this read!! 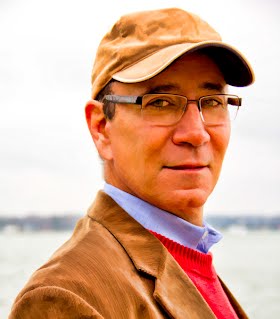 Mike Pace
Author Bio
Mike Pace was born in Pittsburgh, Pennsylvania. He attended the University of Illinois on an art scholarship, and graduated with a BFA degree. He taught public school in Washington D.C.’s inner city, while attending law school at Georgetown University. As an attorney, he prosecuted numerous cases, including those involving murder and rape. He resigned in order to practice law part time, thereby allowing him the time to devote to his first love, creative writing. He lives on the Chesapeake Bay with his wife and two dogs, Blueberry and Scout. DEAD LIGHT is Mike’s first novel.
Website- http:// Mikepacebooks.com
Twitter- www.twitter.com/MikePacebooks