The Space In Between by Jen Minkman--a Review 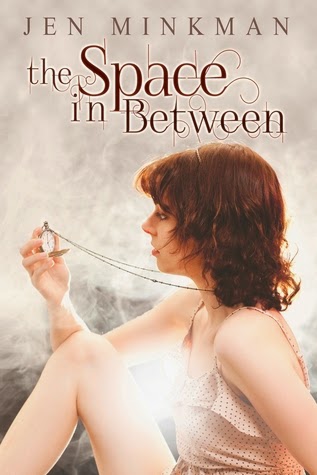 I am a hopeless insomniac and I am so thankful for the many stories available to me in the wee still hours of the night.  I'm not sure it's the best to read a book about The Space in Between   as an insomniac;   for I think I became a very real part of the story--or did I dream that?

When Moira helps out her sister and brother in a Wiccan ritual on Halloween, the last thing she expects is to be swept away to a mystical wilderness. Sitting within the stones of the ancient circle of Penmaenmawr, Wales, she's convinced it's an illusion. But the dark-haired, handsome man with amnesia that Moira meets during her trance cannot be blinked away like a dream.Hayko, the mysterious stranger, won’t let go. After returning home from her stone circle adventure, Moira is beckoned back night after night to the outlandish dreamland by an invisible force. But the hardest part isn't having to fight the terrifying creatures of these nightmares--it's realizing she’s falling for a guy without a past who isn’t real.What if you really can fall in love with the man of your dreams?

This was a paranormal story based on the the space in between life and death.  Jen Minkman  created a world in dreamscape.   I have had dreams that seemed so real and so sensuous, that it was impossible for me to want to awaken.    Nonetheless, the dream was fleeting.    Such were the encounters between Hayko and Moira.   Hayko was trapped in this dreamscape and Moira was the one who would visit him in her sleep and together they worked to recover Hayko's forgotten memories.   Moira was to protect and eventually free Hayko.

Minkman wrote a masterful story, well plotted and fast moving.   Her characters were strong and believable, from Moira with her ADHD to her  controlling boyfriend, and the new love of her life dwelling in the space in between.  What  a fantastic story this became as Moira, her siblings and her friend, Holly researched and used any means necessary to save Hayko.   Once I began this story I was mesmerized and I didn't want to put my kindle down.   I needed to see where this story led and how the reality of one world would resolve itself with the other.

If I were to expound much further, I would definitely be giving away the info you need to read for yourself, so please do.   It was a very satisfying read.

I rated this a 4 Wink read.