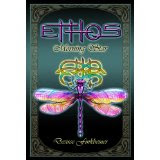 Good Evening!   I just finished reading Morning Star and let me say, it was a most refreshing and enjoyable read.   First of all , let me start by advising this is a fantasy read that you escape into and I really did...escape that is and I loved every minute of it.   The storyline moved right along, it captivated my attention, the characters were strong and well developed.   The only grievance I have is that it is part of a trilogy and I wanted it all right now.

Brianna is the main character and she was a college student who at the age of twelve found a unique mushroom and took it home for her collection.  She had not been able to find another like it mentioned in any of her research.   Brianna was knocked unconscious and put in the hospital to be accused of drug addiction.   Days later her mother was found unconscious also and the mushroom gone.    During this odd time, Brianna met an unusual young man (relatively speaking), named Kalen and he quickly steals her heart and she his.  He is a master of giant beautiful colored dragonflies.   (Now I want you to know, one of the dragonflies was named Nesbit and every time they mentioned him and his face I saw Michael Nesbit from the Monkees in his stocking cap...Lol)
Kalen's mission is to protect Brianna as the mushroom had chosen her to carry its magic as the Life Mother of Ethos.   She had become the balance of life for both Earth and Ethos.

Actually as great fantasy does, I was carried into another world and I felt like I was really there.   Now here of late I have been delving into the young adult lit and I'm liking it for the escape value.  If you are in need of an escape and a great clean romance story, this just may be what you need!   I would recommend it as highly enjoyable and a great escape from the cares of this world!!

If you are unaware, this site will send a daily listing of free kindle books for those of you who like free ebooks.   I do!   My preference is a real book, but I do love freebies and have obtained enough to see me through to the end of this year at least.
Just invite them in and choose your selections from all kinds of genres!   Enjoy!

Following you back from journal of a Craftaholic