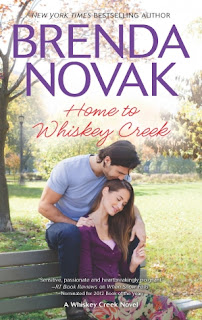 I am so excited to review Home to Whiskey Creek by Brenda Novak.  It is the second book by this author that I have read and thoroughly enjoyed.

Sometimes home is the refuge you need-and sometimes it isn't.  Adelaide Davies, who's been living in Sacramento, returns to Whiskey Creek, the place she once called home. She's there to take care of her aging grandmother and to help with Gran's restaurant, Just Like Mom's. But Adelaide isn't happy to be back. There are too many people here she'd rather avoid, people who were involved in that terrible June night fifteen years ago.

Ever since the graduation party that changed her life, she's wanted to go to the police and make sure the boys responsible-men now-are punished. But she can't, not without revealing an even darker secret. So it's better to pretend....

Noah Rackham, popular, attractive, successful, is shocked when Adelaide won't have anything to do with him. He has no idea that his very presence reminds her of something she'd rather forget. He only knows that he's finally met a woman he could love.

Fifteen years ago, there was a graduation party.   Addy was told she could not attend, but she snuck out and went to the party anyway.    This was a night she would never forget;  it changed her and it changed the lives of five boys in the graduating class.    Nothing would ever be the same again.   After Addy graduated two years later, she left Whiskey Creek and those horrid memories behind her, hoping not to return again.

A lot happens in thirteen years and she did return home to help her elderly grandmother and to help with Gran's restaurant.   Some people weren't too happy to see her back in town. She herself, was not too happy about it.   Her first week back in town, she received a very unpleasant warning  which placed her in the bottom of a mine shaft.  That warning was loud and clear.   Her high school crush became her Prince Charming and happened to hear her cries for help.   He gallantly pulled her from the mine and you guessed it, he fell in love with her.    Ok, I've made this sound like a fairytale--it wasn't but it was a pretty good romance read.  It was a very sweet romance read as Addy wanted to protect Noah from her dark secrets of the past as much as she wanted to forget it all.

Brenda Novak has a way of stirring the heart within the pages of her books.   She creates strong and believable characters.  She addresses issues from rape to a character coming out of his gay closet.  And the reader is deeply invested in the story each character has to tell.  I love reading her novels and just can't put them down once I've started them.   She is sure to be one of my favorite authors.  If you get a chace to read her books, do so.   It's an experience waiting to happen!!     5 Winks!!