Love Me If You Dare by Kate Laurens---Review

I have a special treat for you today.   Kate Laurens has written a Beautiful story about Kaylee and Dylan, a love story of two young people who survived the death of Ella, with differing responses that separated them for three long years.   Here's the Synopsis from GoodReads: 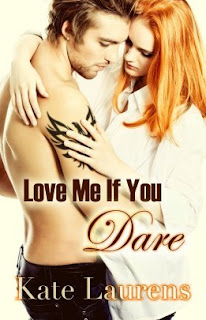 It’s been three years since Kaylee Sawyer has been home—home to the alcoholic mother she can’t handle, home to the painful memories of her sister Ella... and home to the guilt she’s carried for years. About to enter her final year of college, she is determined to come to terms with the mess of her past—and to ignore the guy whose single kiss has been tattooed into her mind forever.

Some things stay the same...

Dylan McKay is still golden haired and dangerous, the flame Kaylee was always afraid to touch for fear of getting burnt. But despite the damage that’s been done, she finds that she still can’t stay away from the one person who accepted her the way she was.

Some things are meant to be.

Kaylee is no longer the innocent girl she once was. Though tragedy ripped them apart before, one look from Dylan brings all of the old feelings rushing back. Torn between her past and her future, she’s not sure if a person can ever truly go home again.

But Dylan doesn’t plan to let her go without a fight.

I always find it odd that when I read, it seems that if I read one archaeological thriller, the next book is a similar read.    The book last read before Love Me If You Dare   was about teen suicide.   Laurens book is a new adult romance story about those who lived past the suicide of a teen, Kaylee Sawyer's twin, Ella had died due to drugs and depression.  Her best friend, Dylan and her twin Kaylee each faced and dealt differently with her suicide.   Kaylee went off to college and stayed away for thee years, determined to let her sister live on through her.   Dylan dealt with his demons and straightened up his wild, bad boy reputation, becoming a responsible adult.  But when Kaylee comes home for the summer, both are in for the ride of their lives, revisiting the past and actually sharing one anothers' misunderstood  responses.

I loved the story.  The premise of Ella's death was revealed in snippets throughout the book and not given all at once.   I liked that as it held your interest in wanting to know what had happened.   Kaylee had assumed that Dylan and her sister had more in common that being best friends...were they also lovers?    Did Dylan see Ella when he looked at Kaylee?   These were questions she needed answered.   Laurens handled the story content with compassion and allowed the characters to mature as their relationship went to new heights.

I'm giving the book four winks as it was very interesting and had a positive ending.  I also loved the romance.  An underlying message to the reader.....learn to communicate with those you love.   Be honest and open rather than sweeping things under the rug and ignoring them.   Not talking promotes misunderstandings and hurt that is hard to heal, although possible to do.    A very good read indeed and short enough to read in a day!!