Into the Devil's Underground by Stacy Green--A Review 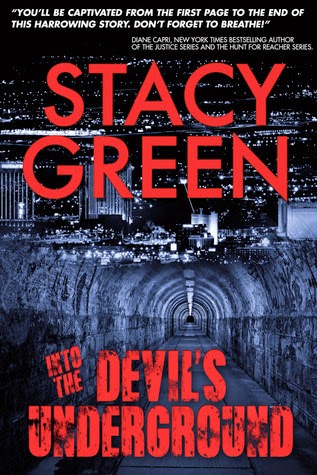 Do you ever want a Do-Over?   When we were children our games often called for do-overs and sometimes we met with a lot of resistance from our friends in calling for it.  When my dear hubby passed away in December, I was screaming for a Do-Over, but as an adult, I knew it would never be.

But in the world of fiction and books, there is a Do-Over.   Stacy Green had such an opportunity.    Her book Into the Dark had a makeover.  The new title is Into the Devil's Underground.

Formerly published as Into the Dark, heavily edited with NEW SCENES. "Why are you here?" Butterflies swarmed in her stomach. Sweat rolled down her forehead and stung her eyes.Laugh lines appeared at the corners of the man's eyes. "You don't know, Miss Emilie?"Her heart skidded to a stop. How does he know my name? Throat constricted, she shook her head."For you, Miss Emilie. I'm here for you."For Emilie Davis, it was business as usual in her job as bank manager of WestOne until two men storm in demanding cash. However, it doesn't take long before Emilie learns one of the men isn't there for money--he's convinced they have a connection and has come to claim her. And he won't give up.When hostage negotiator Nathan Madigan and Las Vegas SWAT enter the bank on a rescue mission, Emilie's captor makes a shocking escape into the abyss that lies beneath the city: the Las Vegas storm drains, a refuge for the downtrodden and the desperate.Through the darkness of the Devil's Underground and secrets from her past, Emilie finds there is no escape from her stalker. She turns to Nathan, who is determined to save her no matter what it takes.But will it be enough?

I had previously read this book when it was titled Into the Dark, but it had since been updated, edited and featured new scenes.   I had an opportunity to re-read the story in its updated form, so I did.   I was surprised that I could get invested in the story so quickly as a re-read.

But the storyline was more than interesting, the characters as strong as I remembered, likable except for Detective Avery.   His character was written well, he was just antagonistic and pompous.


I believe the story flowed better than the the first with the new scenes and all.The story was still entertaining and the information about the Vegas tunnels still tugged at heartstrings.If you like psycho thrillers, this is a good one to read!

I rated this 5 winks!