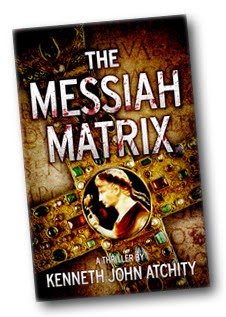 To what lengths would the Vatican go to suppress the secret origins of its power?
The Messiah Matrix is a myth-shattering thriller whose protagonists delve into the secrets of the past—and expose those who hide them still.
A renowned scholar-monsignor is killed in a mysterious hit-and-run in Rome. A Roman coin is recovered from a wreck off the coast of ancient Judea. It’s up to his young American protégé--a Jesuit priest--and a vivacious, brilliant archaeologist to connect these seemingly disparate events and unravel the tapestry that conceals in plain view the greatest mystery in the ecclesiastical world.
Together they pursue their passion for truth—while fighting to control their passion for each other.
What they uncover is an ancient Roman imperial stratagem so controversial the Curia fears it could undermine the very foundations of the Roman Catholic faith.
From the ancient port of Caesarea to Rome's legendary catacombs and the sacred caves of Cumae, this contemporary novel follows their exhilarating quest to uncover the truth about the historical existence of the real "Christian Savior."
The Messiah Matrix may prove to be one of the most thought-provoking
books ever written.
Classical scholar and Yale Ph.D. Dr. Kenneth John Atchity is the only author alive today capable of creating this literary and historically-based masterpiece.
"All that is hidden must now be revealed."
For more information on The Messiah Matrix, including location maps, blog and more please visit: www.messiahmatrix.com

Ok, I am giving this read 3 WINKS.    Not that it is a bad book, but I felt it was a little too technical for me.  Some of the book just went right over my head.   And it was difficult for me to keep at it and get it finished.   I liked the characters of Father Ryan McKeown and Emily, the archaeologist.   They were both very educated and intelligent and understood their mission.

Emily who had friended the monsignor  who was researching the truth about the early church beginnings, was devastated to learn of his demise, (murder).    She remembered most of the information she had been told by Isaac.   Father Ryan was asked to follow in his steps and bring the information to light.    Together they travelled and studied and fell into evil hands as they sought the truth.   The adventure was good.   The sexual tension between them was great, but they each tried to keep that on the back burner!

Possibly, I did not appreciate the challenge to my own belief system.  The book and the alternate theory presented much to be contemplated and was very thought provoking.