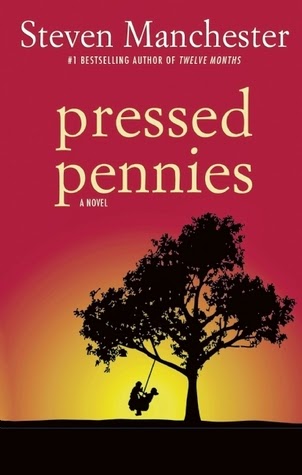 I have a real treat for you today.  Some of you may remember that I love the writing of Steven Manchester.   He quickly became a favorite author of mine, (I have a lot of favorite authors), after I read The Rocking Chair.   It was so beautifully written and when I was offered a chance to read Pressed Pennies in exchange for a fair and honest review, I jumped on it!   I was not disappointed in my decision to read another of his works of art.

To me, reading a book is such a personal experience, journeying with the characters to where ever the author is inclined to take you; feeling however the emotions of the story fill you!   Such is the writing of Steven Manchester.   He is clearly as emotionally entrenched with his characters  as the reader often becomes.

(from GoodReads)  Rick and Abby grew up together, became best friends, and ultimately fell in love. Circumstance tore them apart in their early teens, though, and they went on to lives less idyllic than they dreamed about in those early days. Rick has had a very successful career, but his marriage flat-lined. Abby has a magical daughter, Paige, but Paige's father nearly destroyed Abby's spirit.
Now fate has thrown Rick and Abby together again. In their early thirties, they are more world-weary than they were as kids. But their relationship still shimmers, and they're hungry to make up for lost time. However, Paige, now nine, is not nearly as enthusiastic. She's very protective of the life she's made with her mother and not open to the duo becoming a trio. Meanwhile, Rick has very little experience dealing with kids and doesn't know how to handle Paige. This leaves Abby caught between the two people who matter the most to her. What happens when the life you've dreamed of remains just inches from your grasp?PRESSED PENNIES is a nuanced, intensely romantic, deeply heartfelt story of love it its many incarnations, relationships in their many guises, and family in its many meanings. It is the most accomplished and moving novel yet from a truly great storyteller of the heart.

Pressed Pennies tells the story of Rick and Abby's childhood, separation, and reunion at thirty something adults.   The characters are very realistic and believable.   The writing is smooth and flawless, drawing the reader effortlessly into the story.    Rick and Abby, since childhood have loved one another.   The day that Rick and his family moved from the "hood", Abby and the gang made wishes on pennies and placed them on the railroad track so those wishes would be pressed into the pennies forever.   Rick's penny fell off the tracks, so Abby gave him hers.

Years later, their paths would cross again and the nuance of that young love had survived all those years.   They were ecstatic to find one another again...a second chance.   But their was a complication and her name was Paige.   And Paige didn't want to share; she didn't want a change between her and her mother.    Although I got to the point in the reading where I could easily have hated Paige and her resentful, rude behavior, had either of my parents sought a different mate when I was a child, I would have had the exact same reservations and fears.

Manchester can weave a story like no other and I am touched each and every time, I read his words,   If I ever grow up, I would love to write like him!