Between the Sheets by Robin Wells--A Review 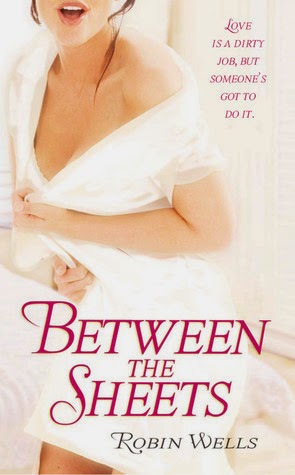 What a joy to be able to read such a delightful book!

How do you have a life when everyone in America thinks you gave the president-elect a fatal heart attack during an illicit sex romp?Emma Jamison never thought she'd have to answer that question, but here she is, smack dab in the middle of a political scandal that would make Monica Lewinsky blush. Trouble is, nobody believes that Emma wasn't the call-girl who killed the president-to-be with her, uh, carnal skills.So Emma packs up and moves to small-town Chartreuse, LA, to escape her infamy and to start over. But when her grandmother starts dating the grandfather of district attorney Max Duval, the quiet life she was seeking blows up in smoke.

What a fun book Between the Sheets by Robin Wells was.   I borrowed this book from my mother and it was a lovely romance.  Published in 2008, this was a character driven read.   The main character Emma Jamison,  had it all together.   She was orderly, owned her own business, provided housekeeping services to high profile clientele, and in the blink of an eye, lost her reputation and her business, all because she was caught in the wrong place at the wrong time.   Can you relate to a life altering change in the blink of an eye?   I certainly can.

In attempts to cleanse her reputation, she had spent her savings in vain.   She finally decided it was time to re-invent herself and decided to  move to Chartreuse, Louisiana.   Her grandmother had signed over her home to Emma and moved into the Sunnyside Retirement Center.    Surely a small town would be just the ticket to re-invent herself.  But small towns are notorious for bringing unwanted scandal front and center and Emma was not welcomed into the small town's folds.

Emma's supportive cast consisted of her Grandmother, Dorothy, Dorothy's boyfriend, Harold Duval, his grandson, Max Duval and new found friend Katie.  Her aggravating nemesis was journalist, Louis Anderson, who this reader loved to hate!   Dorothy was always confusing her wise sayings and Emma always corrected her.   Harold was a dementia patient who was in and out of reality but he was also a very gentle and sweet old man.   Max was a chunk as Dorothy would say meaning hunk and he found Emma to be more than desirable.    And Katie, was an open minded woman who could accept Emma for what she actually was.   Louis, the journalist, didn't care what the truth was...he thrived on notoriety and perceptions; his desire was to sell it big and become famous.

The story was fun, romantic and hilarious in parts.   I laughed so hard at the antics of the old folks from Sunnyside Retirement Center that I couldn't breathe.   I also writhed with frustration over the aggravating and persistant journalist.

But overall, I enjoyed the book created by Wells and it will be a favorite for a long time to come...humorous, feisty, fun, and the quirkiest of characters that were believable and fun.

I rated this a 5 Wink read.