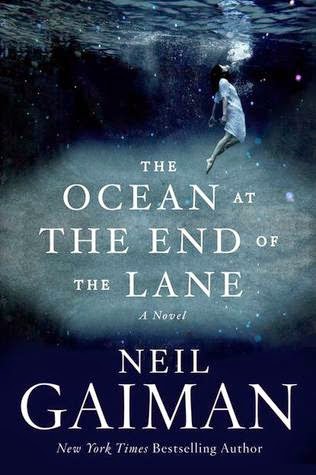 What was the scariest thing in your childhood?  I remember a lavender room at the end of the hall and at night you could see a red flashing light against the night sky.    Now I remember a stairway in the closet, but my mom told me the house did have two sets of stairs, but it never had a stairwell in my closet.   Well, I hated that room and I would sleep with my brothers or my parents every chance I got.    I do not know why that room scared me so, but I absolutely detested it.    It took years for me to enjoy the color purple in any shade and now it is a favorite.   But even if that house still stood, I would never return to that lavender room!

Today's review is a childhood memory of a 7 year old boy, The Ocean at the End of the Lane by Neil Gaiman.

Sussex, England. A middle-aged man returns to his childhood home to attend a funeral. Although the house he lived in is long gone, he is drawn to the farm at the end of the road, where, when he was seven, he encountered a most remarkable girl, Lettie Hempstock, and her mother and grandmother. He hasn't thought of Lettie in decades, and yet as he sits by the pond (a pond that she'd claimed was an ocean) behind the ramshackle old farmhouse, the unremembered past comes flooding back. And it is a past too strange, too frightening, too dangerous to have happened to anyone, let alone a small boy.Forty years earlier, a man committed suicide in a stolen car at this farm at the end of the road. Like a fuse on a firework, his death lit a touchpaper and resonated in unimaginable ways. The darkness was unleashed, something scary and thoroughly incomprehensible to a little boy. And Lettie—magical, comforting, wise beyond her years—promised to protect him, no matter what.A groundbreaking work from a master, The Ocean at the End of the Lane is told with a rare understanding of all that makes us human, and shows the power of stories to reveal and shelter us from the darkness inside and out. It is a stirring, terrifying, and elegiac fable as delicate as a butterfly's wing and as menacing as a knife in the dark.

I had never read Neil Gaiman's work before and it was enjoyable and exciting.    He certainly knows how to evoke the emotions of the reader.  The story was strong and well developed, read smoothly and hooked the reader immediately.   I was drawn into the world of a seven year old boy, and I became afraid for him and his family.

It is never really explained who the Hempstock family was or what they were, more to the point.    But they were neighbors and the only people our little boy trusted and felt comfortable with.   Without them, I doubt he would have survived his childhood.    And his childhood memories soon became jumbled with reality, never to be remembered correctly again.

This was an extremely frightening and gripping read and it felt like I lived it with the main character.   I felt his angst, his fear, and his heartbreak.

I gave this book a rating of 4 Winks!