Good morning my friends and Guess what?    Today's my birthday and since I am old enough not to need or want much (other than books of course), I'm going to give somebody out there a gift.   How about a ten dollar gift card to Amazon?    Any interest?   Just follow this blog if you don't already and sign up using the rafflecopter below.    It can behoove you to see me get older....Argh!  LOL
a Rafflecopter giveaway 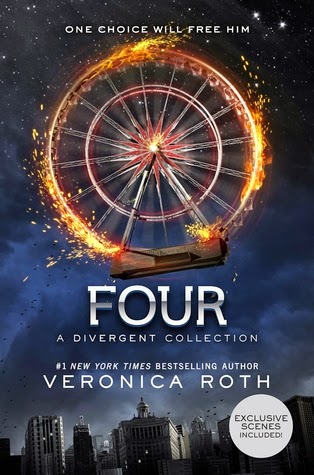 Two years before Beatrice Prior made her choice, the sixteen-year-old son of Abnegation’s faction leader did the same. Tobias’s transfer to Dauntless is a chance to begin again. Here, he will not be called the name his parents gave him. Here, he will not let fear turn him into a cowering child.Newly christened “Four,” he discovers during initiation that he will succeed in Dauntless. Initiation is only the beginning, though; Four must claim his place in the Dauntless hierarchy. His decisions will affect future initiates as well as uncover secrets that could threaten his own future—and the future of the entire faction system.Two years later, Four is poised to take action, but the course is still unclear. The first new initiate who jumps into the net might change all that. With her, the way to righting their world might become clear. With her, it might become possible to be Tobias once again.From #1 New York Times bestselling author Veronica Roth comes a companion volume to the worldwide bestselling divergent series, told from the per-spective of the immensely popular character Tobias. The four pieces included here—The Transfer, The Initiate, The Son, and The Traitor—plus three additional exclusive scenes, give readers an electrifying glimpse into the history and heart of Tobias, and set the stage for the epic saga of the Divergent trilogy.

As just about anyone who knows me knows, I LOVED THE DIVERGENT SERIES!    That being said, I was thrilled when I learned Veronica Roth was writing Four.  I wanted to know more about him, what had transpired to make him the training instructor he was, the man he had become.   And those things  were revealed in the book Four.

Four was such a force in the series and a book hero any heroine or reader could fall in love with.   And it was so good to read about him again....sort of like touching base with an old friend.   Wow, his inner conflicts were many and his attachment to Tris completed him in many ways.  This collection of novellas told of Tobias Eaton's life before he chose his faction.  It explained why he chose Dauntless as his faction.  It revealed why he was as he was.   Told in short sections, the Transfer, The Initiate, The Son and the Traitor we catch a glimpse of the real Four, the human side of the man.

And after we hear his version of the story within, we were treated to three excerpts involving Tris,
First Jumper, Tris, Careful,Tris, and You Look Good, Tris.    This read is fast paced, it is easily read and it is enjoyable.

I rated this at 4 Winks!

Disclaimer:  I read for my pleasure.   I may receive ARC copies for review purposes, but I am not compensated for my reviews .  I like to read and I like to share my reviews.   I post my thoughts without prejudice or bias.  The words are mine and I write reviews based on my humble opinion.  I will admit, I seldom meet a book I don't like.   I purchased this book for my personal collection.

Sometimes, I don't really like when the authors write from another characters POV. I feel like the books tend to lose their magic after it, and it won't have the mystery of what's going on in their mind.

But thankfully I do somewhat like it when Veronica wrote it!!