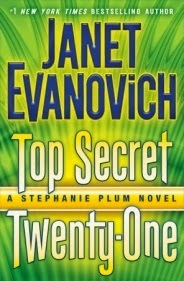 Ok readers and friends...I have to admit, Janet Evanovich is my favorite author for making me laugh and I feel so perfectly at home reading a Stephanie Plum book.   When I read about Stephanie and her adventures, I feel like I am home and among friends!

In the last few Plum books, I have felt like maybe Janet was tired of Steph, but with Top Secret Twenty One, I felt like Evanovich was back!!

Catch a professional assassin: top priority. Find a failure-to-appear and collect big bucks: top score. How she’ll pull it all off: top secret.
Trenton, New Jersey’s favorite used-car dealer, Jimmy Poletti, was caught selling a lot more than used cars out of his dealerships. Now he’s out on bail and has missed his date in court, and bounty hunter Stephanie Plum is looking to bring him in. Leads are quickly turning into dead ends, and all too frequently into dead bodies. Even Joe Morelli, the city’s hottest cop, is struggling to find a clue to the suspected killer’s whereabouts. These are desperate times, and they call for desperate measures. So Stephanie is going to have to do something she really doesn’t want to do: protect former hospital security guard and general pain in her behind Randy Briggs. Briggs was picking up quick cash as Poletti’s bookkeeper and knows all his boss’s dirty secrets. Now Briggs is next on Poletti’s list of people to put six feet under.To top things off, Ranger—resident security expert and Stephanie’s greatest temptation—has been the target of an assassination plot. He’s dodged the bullet this time, but if Ranger wants to survive the next attempt on his life, he’ll have to enlist Stephanie’s help and reveal a bit more of his mysterious past.Death threats, highly trained assassins, highly untrained assassins, and Stark Street being overrun by a pack of feral Chihuahuas are all in a day’s work for Stephanie Plum. The real challenge is dealing with her Grandma Mazur’s wild bucket list. A boob job and getting revenge on Joe Morelli’s Grandma Bella can barely hold a candle to what’s number one on the list—but that’s top secret.

I can't quite define it, but I felt there was a difference in the writing of Top Secret Twenty-One and the past few Stephanie Plum books.  In the previous few books, it seemed like Evanovich herself may be tiring of the Plum series, but in Top Secret Twenty-One, the bond between author and character had returned.   And I appreciated that so much!

Morelli was still the hot Italian cop boyfriend, Ranger was still the cool cuban temptation, and Grandma Mazur was still the life of the party....she is a hoot and her bucket list items were hysterical!   Stephanie was a little more real(maybe more mature even).   She did less eye rolling, was able to say no to Ranger, and handled her involvement with Morelli and Ranger a little bit wiser.

Of course the Evanovich humor was still much in evidence.   Grandma Mazur scratched at least two items off her bucket list, Lula was enjoying specialty pizza at Buster's pizza shop, and Bob, Morelli's big golden retriever ate some evidence, so there were plenty of things to laugh out loud about.

I enjoyed the characters from the annoying to the dangerous and from the sexy to the hungry.   It was good to catch up with Ms. Plum who stated she liked her life as it was.    That's always a good place to be.

I rated this enjoyable read 5 Winks!

Disclaimer:  I read for my pleasure.   I may receive ARC copies for review purposes, but I am not compensated for my reviews .  I like to read and I like to share my reviews.   I post my thoughts without prejudice or bias.  The words are mine and I write reviews based on my humble opinion.  I will admit, I seldom meet a book I don't like.  I purchased this book for my personal collection.