Something in the Air by Siobahn Kinkade...a Review 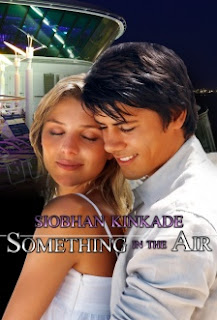 This is the book I won a few days ago on Siobahn's blogspot, Beautiful Mistakes.   Well, I had to read it right away of course and seeing as how it was only 81 pages, it was a great afternoon read.

Kelly Ray Patrick and four of her friends had gone in on a lottery ticket and Won!!   Each of them being 10 million dollars richer, the five friends take a Valentines Day singles cruise, hoping to find the one of their dreams.  While on board, Kelly Ray took note of her best friend forever, BFF Dominic James and wondered when he had turned into such a sexy guy.   Dominic, Nic, on the other hand was evaluating his feelings for Kelly Ray and when they had become more than just those of a friend.

With both of them fighting strong desires and passions, the question became one of would they act on these passions or restrain due to their lifelong friendship with Trevor who had loved Kelly Ray since childhood.

I enjoyed the fact that this book had been a gift and that it was a short read.....I just really hate that everything is a trilogy or a 4 or 5 book set.   When I read, I want the whole story, now.   Or I like to get into it when the entire series is out and published....ok, rant over.   So I read this in an afternoon.  Kelly Ray's character was very well developed and I liked her immediately.    Dominic and Trevor were also very well developed.   Look at that cover, is Nic not absolutely HOT???   I liked the fact they had been lifelong friends...it made the sexual attraction seem natural and not so shocking as if they had just met.   And of course there was the steaming sexy love scenes.   Ok, once in awhile I might be able to tolerate this in a read.   Derfinitely an adult romance story.

Honey where are you?
Posted by Unknown at 5:09 PM

Sometimes having a short book can be the perfect way to spend an afternoon!